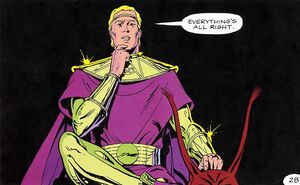 Sometimes confused with Genius Level Intellect and known as "photographic memory", Eidetic Memory is a term used to describe the ability of some characters to mentally recall anything and everything a character has ever been allowed to remember over the course of their entire lives. This can extend further and beyond the scopes of reality's memory as a character like Brainiac, or those like the Gods of Rome, may transcend their memory. For human characters like Batman or Oracle, they can simply remember everything they ever learned.