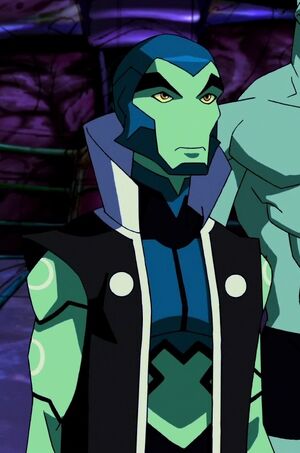 Ambassador not only lead his Reach aliens into Earth in full view of the United Nations but he also partnered with businesses and celebrities in order to deceive his way and his drink right into the homes of humans around the world.

Sometimes called administration and/or authority, Leadership is a term used to describe the ability of some characters to delegate authority and to command the respect and obedience of others. Occupations related to this skill are Politicians, Military Personnel, Businesspeople and super-team leaders. When Donna Troy became the leader of the New Teen Titans, she was heavily criticized by her peers (particularly Hank Hall) for her lack of confidence and inability to take charge. Other leaders may find their skills compromised for reasons of selfishness or vanity. Niles Caulder of the Doom Patrol has been cited as being cold, emotionless, and directing his team towards objectives that do not serve the benefit of the group. Others may effectively maintain a strong command through sheer physical power. Minions who serve under Darkseid for example are fearfully obedient and carry out their master's directives without hesitation or question. Throughout the many iterations of the Legion of Super-Heroes continuity, various team members have served in the capacity of team leaders, some more successfully than others. Veteran Legionnaires such as Cosmic Boy, Mon-El and Saturn Girl are highly regarded for their leadership capabilities, whereas others like Dream Girl and Ultra Boy have been criticized due to a variety of factors.

A
B
Next Last
Retrieved from "https://dc.fandom.com/wiki/Category:Leadership?oldid=1649701"
Community content is available under CC-BY-SA unless otherwise noted.
FandomShop DC Trivia GalaxyQuest