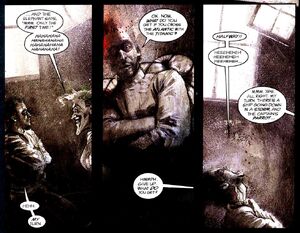 Mental Illness is a mental or behavioral pattern which causes strife or anguish to one's life. These include behavioral or chemical dysfunction, abnormal disorders, intense fears, chemical dependency and, natural to comics, exposure to substances which affect a person's thought process and actions. It is a common weakness to characters in comic books and a somewhat poorly used trope. Used properly, Mental Illness can be a crutch a character must lean on in a story to either overcome or be taken by it. Used improperly, Mental Illness can be a constant background of ill appropriated stigma. Identifying mental illness in comic books requires notice of a character's behavior as it is or becomes irrational to the social norms of the comic book. For instance, Hoppy the Marvel Bunny may act in strange ways to our eyes but within the context of his story he is perfectly normal.