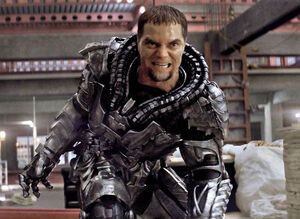 General Zod is a military general and leader of the Kryptonian defense forces.

Sometimes known as military procedure, Military Protocol is a term used to describe the ability of some characters to know and understand the policies and procedures in regards to the armed services. It is assumed that most people with experience in this area have at one point or another enlisted in the military, but this is not true of all cases. Lois Lane for example, is a self-avowed "army brat" with extensive knowledge of military protocol even though she has never served in the armed forces. Experience and knowledge of military procedures does not necessarily mean that the person possessing such skills always utilizes them. Janos Prohaska of the Blackhawks has cultivated quite a reputation for his unprofessional and ofttimes rogue behavior.