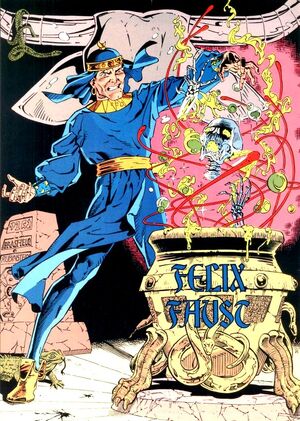 Faust is a magician with a history of backhanded tactics which he uses to obtain more and more knowledge.

Sometimes called mysticism, Occultism is a term used to describe the ability of some characters that have obtained magical or hidden wisdom. Users of this knowledge are called "occultists" and invoke their textbooks to unlock the power of magic. Some use spiritual tactics, like Native Americans. Some use beliefs and invocations, like Buddhists or Hindus. Characters with this ability can use magic without being born with the ability to use magic.

A
B
C
D
E
F
G
H
I
Next Last
Retrieved from "https://dc.fandom.com/wiki/Category:Occultism?oldid=1582535"
Community content is available under CC-BY-SA unless otherwise noted.
FandomShop Newsletter GalaxyQuest