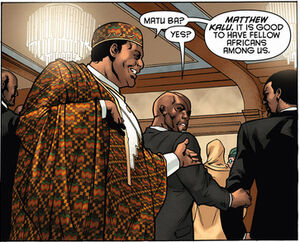 Prime Minister Kalu is the leader of the Congo.

Sometimes called "politics" or "political organization", Political Science is a term used to describe the ability of some characters to study or employ social science disciplines that concern state and/or governmental politics. Certain characters have trained in the ways of politics such as Lex Luthor and Pete Ross whereas others have a political influence such as Oliver Queen and James Gordon.