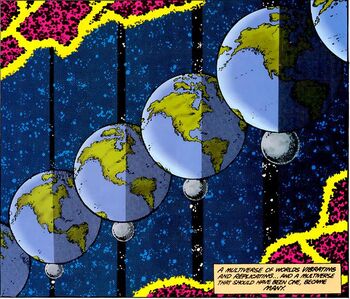 Realities in this context are typically parallel universes (known as Level III in physics), although they may also be possible futures or continuities not connected to the DC Universe. Usually, these realities are named for the Earth they contain. For example, Earth-Two was in the Earth-Two Universe, which logically would be called Universe-Two, but it wasn't.

Welcome to the wacky world of comic book logic and nomenclature.
Trending pages

0–9
A
B
C
D
Next Last
Community content is available under CC-BY-SA unless otherwise noted.
Advertisement
Follow on IG TikTok Join Fan Lab