Fast, reliable and I don't get stopped by slapheads like you. When someone hires Catwoman, they hire the best.

The second Catwoman was a thief like her predecessor, but also had the power to be in more places at the same time.

The daughter of Danton Black, alias the metahuman criminal Multiplex, the girl who would become Catwoman inherited her father's duplication powers. However, where her father could create limitless copies of himself, she can only create up to nine. Using her physical skills and donning a high-tech costume, she took up the mantle of legendary Gotham criminal, Catwoman. Thus, the legendary rivalry between Batman and Catwoman was reborn.

She first met the new Batman during an attempted burglary. While he was excited to continue their predecessors' rivalry, she was underwhelmed by the idea.[1] She was later hired by Hush to place a tracker on Batman, but when she went to claim her reward, Hush tried to kill her instead.[2] The original Batman was able to rescue her using a Bat-Wraith, however, the robot malfunctioned and she was forced to use all her copies to fight Hush. The fight climaxed when Bruce blew up the Bat-Wraith to prevent hush from studying it.[3] She followed the tracker to find Batman, only to find he was in critical condition. Bruce was able to walk her through a diagnostic and closing his wounds, saving his life.[4] She caught wind of Hush's plan to destroy Neo-Gotham and intercepted Batman and Dick Grayson on their way to him. She joined them in defeating him and, afterwards, returned to her job.[5] 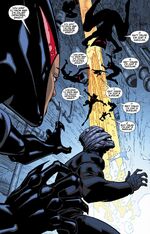 Retrieved from "https://dc.fandom.com/wiki/Catwoman_II_(Hush_Beyond)?oldid=2801904"
Community content is available under CC-BY-SA unless otherwise noted.