This page contains information about Catwoman (Volume 2) . Catwoman was an ongoing series published between 1993 and 2001. Catwoman was deemed popular enough to get her own book after the success of a Catwoman 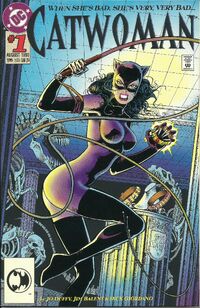 Catwoman was an ongoing series published between 1993 and 2001. Catwoman was deemed popular enough to get her own book after the success of a Catwoman mini-series titled Her Sister's Keeper. Jo Duffy wrote the first arc Life Lines, with Jim Balent as the book's longest-running artist. Duffy wrote the series for 14 issues, then left after Zero Hour. Doug Moench wrote the "Zero Month" issue, then Chuck Dixon took over as head writer beginning with The Catfile. This period also featured Family Ties by Deborah Pomerantz and Alan Grant's crossover The Secret of the Universe. Dixon wrote a tie-in to Underworld Unleashed, and crossovers as part of Contagion and Legacy. Moench took over as writer with his Year 2 arc, then his second arc She-Cats. They celebrated 50 issues in 1997. Devin Grayson became regular writer shortly after, writing a Cataclysm tie-in followed by her first arc Only Happy When it Rains. Grayson and Balent co-wrote a DC One Million tie-in, then Grayson finished her run with Hints and Allegations and I'll Take Manhattan. John Ostrander took over writing during the No Man's Land crossover. Bronwyn Carlton had a lengthy run with illustrators including Staz Johnson, Cary Nord, Craig Rousseau, and Peter Doherty. Jordan B. Gorfinkel also wrote an issue with N. Steven Harris, and Carlton did a tie-in to Officer Down with Mike Lilly. John Francis Moore and Staz Johnson ended the series in a three-issue run.

Retrieved from "https://dc.fandom.com/wiki/Catwoman_Vol_2?oldid=2643984"
Community content is available under CC-BY-SA unless otherwise noted.