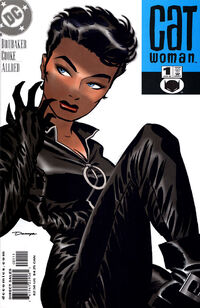 I really liked in the Silver Age Catwoman character, who was more like a high-society sort of person. And Matt asked me what I thought of it, and I told him, and he said, 'So, do you want to take over the book, then?' And I realized I had kind of talked myself into it through the conversation. And I just said, 'Well, can we redesign her costume?' And he said, 'Yeah.' And I said, 'Well, I'll do 12 issues, at least.' And I ended up staying on it for almost 40 issues, I think.

Retrieved from "https://dc.fandom.com/wiki/Catwoman_Vol_3?oldid=2830678"
Community content is available under CC-BY-SA unless otherwise noted.