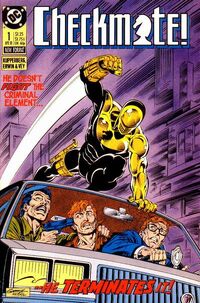 Checkmate (Volume 1) began publication in April of 1988, only one month following the title group's introduction in Action Comics #598. The series spanned a total of thirty-three issues until cancellation in 1991. In 2005, DC Comics revamped the Checkmate concept in the pages of the Omac Project limited series, and a second series began publication in 2006.

Retrieved from "https://dc.fandom.com/wiki/Checkmate_Vol_1?oldid=2407547"
Community content is available under CC-BY-SA unless otherwise noted.