Chester Runk, known by the nickname Chunk, is a scientist and ally to The Flash. He is also a close personal friend of Wally West. Runk grew up to become overweight, which increased as an adult when he accidentally opened a black hole inside his body. This makes him need to eat vast quantities every day to appease it. Chunk was created by Mike Baron and Jackson Guice, first appearing in The Flash (Volume 2) #9. (1988) 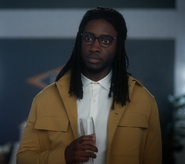