Clarence Charles Batson, known as C.C. Batson, is the biological father of Billy Batson and was formerly the seventh member of the Shazam Family under Mr. Mind's control.

In Zumbrota, Minnesota, Clarence and his wife Marilyn were driving to the hospital to prepare for the birth of Billy. Due to a utility pole collapsing onto the road, Billy was born in the car. They left that night due to Marilyn's father's disapproval and the fear that Billy would be taken away from Clarence.[1]

They drove to Philadelphia and settled. He revealed that for the past ten years, he had gotten himself in legal trouble, inlcuding robbing banks. To remove Billy and Marilyn from his troubles, he left them and ended up in prison after.[1]

After getting out of prison, and requesting where Billy lived from the adoption agency, C.C. showed up to the home of Victor and Rosa to try to see Billy, who was currently exploring the Magiclands.[2]

After Rosa and Victor realized that the children weren't home, they called the police. C.C. became saddened, believing Billy had run away to avoid meeting him, revealing that Billy had ran away from his earlier home.[3] After Billy and Mary are thrown out of the Funlands, they return home and Billy meets C.C. again. C.C. tells him about his life before and how he wishes to make amends with Billy and his mother now that he's out of prison.[4] 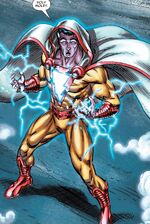 After Billy's reveal to his adoptive parents, and leaving to the Darklands, C.C. left the house to wander. He was spotted by Black Adam and was taken hostage. After being rescued by Billy, and almost falling to his death, Billy granted him the power of Shazam! and became the seventh champion of the Shazam Family.[4]

After allowing Mamaragan to stay at the Batson household, the Wizard confronted C.C. while he slept, stating he was the cause of the evil he sensed. He attacked C.C. which resulted in a fight between Billy and him.[5]

During the fight, the rest of the Shazam family fought alongside Billy to try to stop the dispute. Mamaragan, in turn, tried to take their powers away since he was not the one who gave it to them to begin with. Billy was able to stop that from happening. C.C. walked out to try to reason with the Wizard, but only received his desire to destroy him in return. Billy then gave C.C. his powers back and sent the Wizard away simultaneously.[6]

After all this, Black Adam emerged and attacked C.C. in an attempt to get Billy to relinquish his powers. C.C. casts a spell to send Adam's soul to the Darklands. After being questioned on how he knew of that spell, C.C. told lies to try to move on. Billy then deduces that his father is being controlled by Mr. Mind.[6]

According to Mr. Mind, before he took control of him, C.C. was a street pickpocket thief who stole from passer-byers. He had no intention of finding Billy at all.[7]

After Billy defeated Mr. Mind and freed C.C. of his control, Billy talked to his father under the guise of Shazam. Having no memory of anything that had happened, C.C. rejected the idea of his involvement with everything. When asked about his son, he revealed that he purposely left Billy due to he and Marilyn being unfit parents. He left to return to his life without the Shazam Family.[8]

Retrieved from "https://dc.fandom.com/wiki/Clarence_Charles_Batson_V_(Prime_Earth)?oldid=2789161"
Community content is available under CC-BY-SA unless otherwise noted.