I'd rather... be empty... than completely full of shit.

Robotman is a former racecar driver now inhabiting an android body. He is a member of the Doom Patrol.

Clifford "Cliff" Steele was an adventurer and daredevil who had agreed to be injected with experimental nanomachines that were designed to improve and repair his body over time. However, after he his body was badly injured in a car crash, the nanomachines responded by creating a full robotic body to encase and protect his still living brain.

Though he was initially distraught over his condition, the nanomachines prevented him from being able to kill himself. He eventually came to terms with his condition and became a freelance superhero, assisted by a woman named Maddy, who was involved in the nanomachine project and blamed herself for Cliff's condition.

Crawling from the wreckage

Cliff was eventually recruited by Niles Caulder to join his team the Doom Patrol, which consisted of other heroes with extraordinary abilities. They went on many surreal adventures, such as fighting the Scissormen, Brotherhood of Dada, and the Candlemaker.[1]

Robotman would become close friends with the hero Dorothy Spinner, but, after she went into a terminal coma, he was forced to make the call to end her life support.[2]

After some membership shakeups in the Doom Patrol, Cliff was re-recruited by the Chief and assisted in trying to recruit the new Power Ring to the team. However, the Justice League was also interested in speaking with its bearer Jessica Cruz, putting the two superhero teams into conflict.

During their skirmish, Lex Luthor revealed that all the Doom Patrol's "accidents" that gave them their powers were caused by the Chief, himself. Their morale shattered, the Doom Patrol disbanded.[3]

While fighting crime by himself, Robotman was blasted into the vicinity of an EMT named Casey Brinke. Heavily injured, Cliff wandered into traffic and was hit by a truck, shattering his body to pieces. Casey, confused by this robot-man, collected all his pieces and brought them home with her.[4] Though Casey had no idea what she was going to do to fix him, her strange new roommate Terry None was talented enough to perfectly reassemble Cliff in record-breaking time, though she failed to replace his brain back into the suit.

However, when the villainous alien corporation Vectra came looking for Danny the Street and his known associates, they tracked Cliff's location and replaced his brain back into the robot to interrogate him. However, Cliff outsmarted them and fought his way through their forces within Casey's apartment.

Soon after, Cliff was reunited with his friend and former teammate Larry Trainor, who had lost his connection to the negative spirit that made him Negative Man. However, the negative spirit found both Cliff and Larry and invited them to his dimension to stand trial for the right to be tethered together again.

While in the spirit's dimension, the jury was critical of Larry and Keeg Bovo's professional relationship but demanded they be forced to be together again. However, Cliff interjected, shouting that the jury had no right to force Larry to do anything and that it should be up to him to decide if he wanted to accept the negative spirit back. After some thought, Larry accepted the spirit and his role as a superhero, once again becoming Negative Man, and the two heroes were returned to their reality.

Robotman and Negative Man were thrown right into the action, as a new coalition of heroes fought to save Danny from being abused by Vectra, who sought to use Danny's new power to creation sentient life to create a limitless supply of meat for their intergalactic fast food restaurants. Vectra was defeated, but their work wasn't done.[5]

The heroes landed in New Mexico, brought there by Danny as they were escaping Vectra's headquarters, to reconnect with the former Doom Patrol member Jane, whose alternate personality Dr. Harrison was brainwashing people to join her cult. Cliff, who had been close with Jane when they were team members, was projected into her mind by Negative Man and helped free her from her evil personality. With Jane back in control of her own body, the cultists were freed, and the heroes officially became the newest incarnation of the Doom Patrol.

Cliff and the new Doom Patrol were briefly contacted by Niles Caulder, their former chief and the man who caused their accidents. Though Cliff was highly critical of Niles and despised the man, Negative Man encouraged Cliff to give him another chance as the leader of their team. Cliff hesitantly accepted, even allowing Niles to questionably upgrade his robotic body into something that looked like one of his earliest models, until the team realized that Niles was just as shady and self-serving as he'd always been. Cliff transferred his brain back into his other body and cut ties with Caulder for good.[6]

Mister Nobody, a villain from the Doom Patrol's past, resurfaced and created a new villainous team to spread his surrealist-brand of chaos throughout the world, calling themselves the Brotherhood of Nada. Robotman and the Doom Patrol sprung into action to stop Nobody's team as the world fell into chaos from the villain's $♯!+.[7]

However, because Mr. Nobody's real-fictional daughter Terry None kissed Casey Brinke, another real-fictional person, reality shattered, bringing the Doom Patrol to a dimension outside their own, ruled by a copyright violation called the Disappointment. There, Cliff was hit with the bombshell that he himself wasn't real; he was a fan-fiction bastardization of a different, real Cliff Steele.

Despite the massive perspective change Cliff experienced, the Doom Patrol stopped the Disappointment and rediscovered Rita Farr, adding her back to the team.

However, reality still wasn't safe, as a higher-dimensional company called Retconn sought to sell Prime Earth to a new buyer. Retconn, wanting to clean up the universe to make it more presentable to a consumer, sent Milkman Man to the world to homogenize everything with his mind control milk. Once again, it was up to the Doom Patrol to save reality.

After freeing the Justice League of America from the milk's mind control, the Doom Patrol and JLA teamed up to stop Retconn from selling their world. Though they were successful, reality was irreparably changed. Among those changes, Cliff was altered to have his original human body back - no longer needing the name Robotman.

Weight of the Worlds

Cliff wouldn't be a human for very long though. Still coping with the fact that he wasn't real, along with his new fleshy body, Cliff visited his abusive mother to gain a sense of closure with her. However, as was usual with her, she berated him, going so far as to break him emotionally that he drove his car off a cliff in frustration.[8]

However, Cliff's suicide attempt was stopped in part by the Doom Patrol, who reached the crash in time. Though they couldn't save his new human body, appropriately, his brain was saved and put inside a new robot body.

This new body, created by Negative Man's negative spirit Keeg Bovo had the added benefit of conditional upgrades, encouraging Cliff to do good deeds to earn new superpowers.[9] Cliff had a blast with his new life goal and, after helping everyone he could in Dannyland, disappeared in space to help the entire galaxy as Cliff Fixit™.

Having helped as many people as he could in the galaxy, Cliff gained so many powers that he eventually gained the ability to create perfect clones of himself. As this power went out of control, his cloned bodies began to combine with one another to the point that Cliff lost his human autonomy and became a sentient planet with the unwavering goal to help the universe - in any means necessary. As this new celestial body, Robotman had become Planet Cliff. 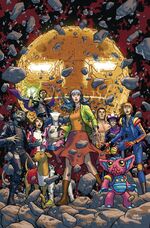 The Doom Patrol was forced to spring into action to stop Planet Cliff's rampant over-helping. Though, in one alternate scenario, the hero Mento would absorb Cliff's conditional upgrade system into his helmet, creating a possible future where the Doom Patrol would become trapped in Mento's imaginary city of Goliath for years, Casey Brinke from that future went back in time to tell Jane in the present how to avoid that.

Instead of Mento absorbing the conditional upgrades, Jane went to Planet Cliff's core, which housed Cliff's brain. There, the two connected, with Cliff letting go of all the pain he had been harboring that had caused him to reach the point he was at. Using his powers to willingly remove his own upgrades, Cliff returned to being a single being, reducing his consciousness back down to that of a robot baby.[10]

Retrieved from "https://dc.fandom.com/wiki/Clifford_Steele_(Prime_Earth)?oldid=2807492"
Community content is available under CC-BY-SA unless otherwise noted.