View source
watch 03:36
Wiki Targeted (Entertainment)
Do you like this video?
Play Sound

This page uses content from Wikipedia. The original article was at Comics Code Authority. The list of authors can be seen in the page history. The text of Wikipedia is available under the Creative Commons Attribution-ShareAlike 3.0 Unported License. 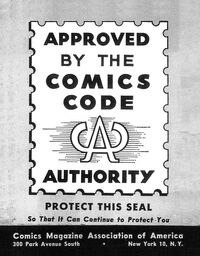 The Comics Code Authority (CCA) is part of the Comics Magazine Association of America (CMAA), and was created to regulate the content of comic books in the United States. Member publishers submit comic books to the CCA, which screens them for conformance to its Comics Code, and authorizes the use of their seal on the cover if the books comply. At the height of its influence, it was a de facto censor for the U.S. comic book industry.

The seal began appearing on DC Comics covers in March, 1955.

The CCA was created in 1954 as part of the CMAA in response to public concern about what was deemed inappropriate material in many comic books. This included graphic depictions of violence and gore in crime and horror comics, as well as the sexual innuendo of what aficionados refer to as "good girl art". Dr. Wikipedia:Fredric Wertham's book "Seduction of the Innocent" rallied opposition to this type of material in comics, arguing that it was harmful to the children, who made up the majority of the comic book audience. Senate subcommittee hearings led by Estes Kefauver had many publishers concerned about government regulation, prompting them to form a self-regulatory body instead.

Like previous codes, the CCA prohibited the presentation of "policemen, judges, government officials, and respected institutions ... in such a way as to create disrespect for established authority." But it added the requirements that "in every instance good shall triumph over evil" and discouraged "instances of law enforcement officers dying as a result of a criminal's activities." Specific restrictions were placed on the portrayal of "kidnapping" and "concealed weapons".

Depictions of "excessive violence" were forbidden, as were "lurid, unsavory, gruesome illustrations." Vampires, werewolves, ghouls and zombies could not be portrayed. In addition, comics could not use the words "horror" or "terror" in their titles. The use of the word "crime" was subject to numerous restrictions.

Where the previous code had condemned the publication of "sexy, wanton comics," the CCA was much more precise: depictions of "sex perversion", "sexual abnormalities", and "illicit sex relations" as well as "seduction", "rape", "sadism", and "masochism" were specifically forbidden. Love stories were enjoined to emphasize the "sanctity of marriage" and those portraying scenes of passion were advised to avoid stimulating "lower and baser emotions."

The CCA had no legal authority over publishers, but magazine distributors often refused to carry comics without the CCA's seal of approval. Some publishers thrived under these restrictions, others adapted by canceling titles and focusing on Code-approved content, and others went out of business.

Publisher William Gaines believed that clauses forbidding the words "crime", "horror" and "terror" in comic book titles had been deliberately aimed at his own best-selling titles "Crime SuspenStories", "The Vault of Horror" and "The Crypt of Terror." These restrictions, as well as those banning vampires, werewolves and zombies, helped make his company, EC Comics, unprofitable; all of its titles except MAD were cancelled in the year following the CCA's introduction.

Fredric Wertham dismissed the Code as an inadequate half-measure.

Influence of the CCA mostly diminished from the 70's to the 90's. The logo has gone from a large icon, meant to indicate to parents that the book was okay for their kids, to almost a small footnote on the cover. As of 2007, DC Comics and Archie Comics were the only two major comics publishing companies to continue submitting stories to them for approval. However, DC only submitted stories from the Johnny DC and DC Universe lines, and even still occasionally published unapproved stories regardless. In 2011, the Code ceased to exist as Archie and DC pulled out of it early that year.

The 1954 code stated the following: