Conqueror of the Barren Earth (Volume 1) 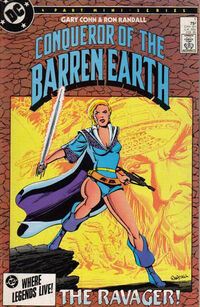 Conqueror of the Barren Earth is a four issue limited comic series that ran from February 1985 until May 1985.

Set thousands of years in the future, Earth’s sun has become a red giant, laying waste to the planet it once warmed. Long before, most of mankind had departed for other worlds, leaving the dying world to be fought over by the savage forces that remained behind.

In conquering the stars, mankind had found new friends and a terrible new enemy: the warlike Qlov. The Confederation and the Qlov fought across the far reaches of the galaxy, until finally mankind was driven back where it had begun... on Earth. Desperate to reclaim their homeworld, the space-ark Renewal and the rest of the rag-tag fleet approached Earth, where it was viciously attacked by Qlov forces. Only one escape-pod from each of the five starships survived. One of these survivors was the female warrior Jinal Ne' Comarr.

Light-years from her countrymen, Jinal the warrior now leads the five other human survivors on a quest to become... the Conqueror of the Barren Earth!

Back to Comics Contents : Comics C : Conqueror of the Barren Earth Vol 1

Retrieved from "https://dc.fandom.com/wiki/Conqueror_of_the_Barren_Earth_Vol_1?oldid=2775075"
Community content is available under CC-BY-SA unless otherwise noted.