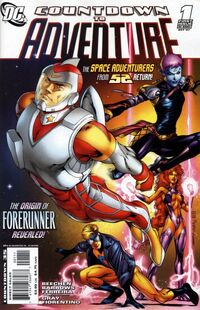 Countdown to Adventure was an eight-issue limited series with each issue containing two stories. The first vignette featured Adam Strange and included guest appearances by Animal Man and Starfire. All three heroes shared an outer space adventure with one another in the 2006 weekly series 52 (Volume 1). The back-up feature focused on Forerunner, a character that was introduced in the pages of Countdown (Volume 1). The Forerunner vignette chronicled her origin as well as her relationship to Monarch.

Back to Comics Contents : Comics C : Countdown to Adventure Vol 1

Retrieved from "https://dc.fandom.com/wiki/Countdown_to_Adventure_Vol_1?oldid=2271122"
Community content is available under CC-BY-SA unless otherwise noted.