""More Pain Comics (Part I) - Descent into the Psychosphere"": Fate had been good to psychiatrist Dr Kent Nelson. He had a lovely wife and daughter, a well-heeled practice, recognition in the community, and taught an annual seminar at the university. This made Kent

"More Pain Comics (Part I) - Descent into the Psychosphere"

"More Pain Comics (Part I) - Descent into the Psychosphere"

"A Syzygy in Plastic, Part One: Occultation"

Every journey -- even one to the edge of existence and realms beyond -- must come to an end. Whether the terminus is a place on a map, a marker on the path of life, or a state of being, every traveler gets there... sooner or later. By intention or fluke. By serendipity or misfortune. Through random chance, or inexorable -- Fate.

Synopsis for "More Pain Comics (Part I) - Descent into the Psychosphere"

Fate had been good to psychiatrist Dr Kent Nelson. He had a lovely wife and daughter, a well-heeled practice, recognition in the community, and taught an annual seminar at the university. This made Kent's affair with a university student reckless in the extreme. To compound the situation, he left the evidence lying around; when his wife found out, she left him, taking their daughter with her. Kent slid into depression, barely able to care about his patients any more. He pretended he was listening, faked giving them his attention, but even that began to pall eventually. Ultimately, it was this lack of attention which led to his final downfall.

One of Kent's patients, a man who claimed he was being tormented by an unearthly creature, had a psychotic episode, driving his car along the Las Vegas Strip, running people down. Thirteen died, and many more were injured. Kent, aware he'd failed the man, used his family gift, the ability to see into others' minds, to find out what had driven him to it. What Kent saw shook him so badly, he shut the memory out, trying desperately to forget it. Kent was blamed for the deaths, standing by and doing nothing when his patient went off his meds. He was sued by the victims' families for negligence and wrongful claims - and by his patient's family for malpractice. He lost his house and his job. His wife divorced him, and his lover left him. Several months later, Kent had ended up a derelict on the streets, taking part in bumfight videos for money. After being left in a dumpster to "sleep off" his second fight, he fumbled around for something he could use to cover himself against the storm overhead. 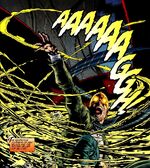 Nelson finds the Helmet of Fate in a dumpster

He finds the Helmet of Fate, which had landed in the dumpster after traveling through the realms of existence. Thinking only of how he could use it to cover his head, Kent put it on - only to find the Helmet taking him on a mental tour of its recent past, from the end of the Day of Vengeance onwards, after Captain Marvel had hurled it into space. Then, much against Kent's will, it took him on a tour of his /own/ recent past.

Refusing to relive his past, Nelson removes the Helmet but at that same moment a hellhound attacks him. Shocked by the sudden attack, Nelson puts the Helmet back and this time, he is transformed into a being of incredible power, capable of eliminating the hellhound with a special magic ability. As Nelson contemplates the corpse of the beast, a voice from behind talks and refers to him as "Doctor Fate". When Nelson turns around, he is confronted by a demonic figure sitting on a diabolical horse. The Demon talks to Doctor Fate and informs him that he is going to execute him for killing one of his valuable animals.

Appearing in "More Pain Comics (Part I) - Descent into the Psychosphere"

Synopsis for "A Syzygy in Plastic, Part One: Occultation"

Appearing in "A Syzygy in Plastic, Part One: Occultation"

Retrieved from "https://dc.fandom.com/wiki/Countdown_to_Mystery_Vol_1_1?oldid=2851035"
Community content is available under CC-BY-SA unless otherwise noted.