"More Pain Comics (Part II) - Devourer of Souls": As soon as he is confronted by Negal, Kent Nelson starts listening voices coming from the Helmet of Fate. These weird words sound like incantations and when Nelson speaks the out loud, they

As soon as he is confronted by Negal, Kent Nelson starts listening voices coming from the Helmet of Fate. These weird words sound like incantations and when Nelson speaks the out loud, they help him perform incredible magical feats, with which he is able to defeat Negal, who had the upper hand in the fight until that moment.

At dawn, Nelson's powers are removed and the Helmet returns to it's original form. Knowing that whatever happened that night was caused by the helmet, Nelson decides to go to a pawn shop and sell the item for 175 dollars, which he uses to get a decent meal and shortly afterwards, he finds a job as a street cleaner. During his work, Nelson comes across Burr, the man who double-crossed him and the reason why he found the helmet in the first place. Nelson cust short his contact with Burr and makes his way back to the rented complex he acquired. 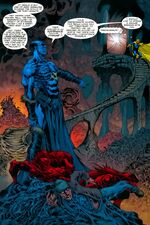 Negal's Bargain
That night, Nelson's dreams haunt him and become nightmares. When he wakes up, he realizes that the Helmet is sitting at the edge of his bed and knowing that he can't avoid the object now, he decides to wear it again in order to eliminate the voices from his dreams. As soon as he puts the helmet on, the magic powers return and he soon transforms back to the powerful being he was last night. At that moment, a portal opens in his room and as he walks through the interdimensional gate, he finds Negal waiting for him on the other side. The demon wants to make a bargain with the new "Doctor" and he gives Nelson to chance to create peace between them, as his predecesor did. Nelson refuses and the two enemies start fighting. However, Nelson's magical powers don't work in whatever dimension they were located and instead, he has to rely on his physical condition and his lacking fighting abilities. Nelson manages to defeat Negal a second time using his own realm against him and soon, he opens a portal to return back to Earth.

Once outside, Nelson reflects on the new enemy he has made and also the new possibilities that have opened up for him. At the break of dawn, the helmet's powers recede and Nelson becomes a regular man once again.


Appearing in "A Syzygy in Plastic (Part II) - Transit"

Synopsis for "A Syzygy in Plastic (Part II) - Transit"

Retrieved from "https://dc.fandom.com/wiki/Countdown_to_Mystery_Vol_1_2?oldid=2250791"
Community content is available under CC-BY-SA unless otherwise noted.