Courtney Whitmore is a young heroine who has been a member of the Justice Society of America and the JSA All-Stars. She originally operated as Star-Spangled Kid using Sylvester Pemberton's Cosmic Converter Belt, but when Jack Knight left her the Cosmic Staff, she adopted the name Stargirl. With the belt and the staff, she carries on the legacies of Star-Spangled Kid and Starman.

Courtney was the daughter of Sam Kurtis and Barbara Whitmore, born and raised in sunny California. Her parents broke up, and Barbara got remarried to a man named Pat Dugan. The family moved to Blue Valley, Nebraska; Courtney did not like the move or her new stepdad. In Nebraska, Courtney made new friends quickly though, with Mary Kramer and Josh Hamman. 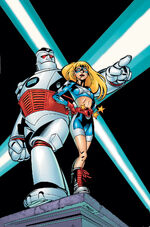 While rummaging through her stepfather's belongings, she found Sylvester Pemberton's old equipment. Realizing her stepdad used to be Stripesy, the only adult sidekick to a teen hero in history, had filled her with joy, as she had a new means to get back at him and ridicule him.

Courtney donned the Star-Spangled outfit to a patriotic-themed spirit week dance to mock her stepfather, but, coincidentally, they were attacked by Dragon King's minions. Dugan used his newly built S.T.R.I.P.E. Armor to help Courtney stop them and save the day. Afterwards, the two decided they would form a new super-duo - Star-Spangled Kid and S.T.R.I.P.E. [2]

The attack on the high school caught the attention of Oracle, who clued Robin in on the new legacy hero. Though they had little to go on, Young Justice traveled to Nebraska to investigate. Their initial meeting was not smooth (as they kept thinking the S.T.R.I.P.E. armor was a robot) but in the end, Courtney and Young Justice solved an alien invasion together.[3]

Courtney ultimately did not join the team, but she did come along on their mission to Zandia to stop Agu Sin Gaaz.[4]

In Blue Valley, most of her adventures involved Dragon King and his daughter, Cindy Burman. Cindy was the most popular girl in school and as evil as her father. She adopted the name Shiv and became Courtney's arch nemesis.

During her adventures, she teamed up with Starman and the Shining Knight, who carried a grudge against Dragon King as he had killed his love Firebrand. 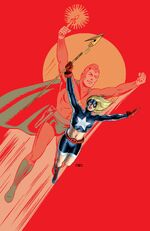 A new name and a new legacy

When Jack Knight retired as Starman, he knew who to pass his Cosmic Staff down to. He had previously met Courtney and was impressed how she managed during a worldwide attack by Klarion Bleak. She had previously wielded the staff then, and so, as Knight departed to raise his son in San Francisco, he left the mighty weapon and the legacy of Starman to her.[5] Courtney dropped her alias as the Star-Spangled Kid to become Stargirl,[6] a name Mary had suggested to her when she first became a hero.[2]

Courtney only sporadically saw her biological father Sam Kurtis and when she did, it was rarely positive.[7] When she found him working as a low-level goon for the Royal Flush Gang, she broke all ties with him for good.[6] She started acknowledging Pat as her real father, even after Kurtis' death.[8]

Stargirl was a much appreciated junior member of the Justice Society. She learned a lot from Power Girl and had a brief fling with Billy Batson, also known as Captain Marvel. The rest of the Society did not know Captain Marvel was actually a fourteen year old boy and made their relationship complicated, leading to Captain Marvel quitting the JSA.

Al Rothstein and Jakeem Thunder also had an affection for her. She did have feelings for Al, and even saw a vision of them being married in the future. When he was tried for the massacre in Khandaq, she told him she would wait for him.

Stargirl began attending college. She changed her equipment: her rod was compresses to a small cylinder, and when she activated it, her costume and belt appeared while the rod grew to full size.

Around this time, she also took driving lessons from Mr. Terrific. [9] 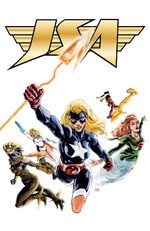 Stargirl and the Justice Society All-Stars

With many of its members back from Earth-Two, Green Lantern, Flash and Wildcat reformed the JSA, and Stargirl was inducted. She became friends with Ma Hunkel's granddaughter, Maxine Hunkel, and helped her form her identity, Cyclone.

However, the team encounter drama within and split up due to differences between the old guard and the new. Courtney decided to join the JSA All-Stars. At first she felt out of place because everyone was older than her, but Power Girl convinced her that they needed her and that she was a role model to most of the members.

During this time, Albert Rothstein was missing and Johnny Sorrow claimed to be in love with her. He took her to the subtle realms disguised as Atom Smasher in order to receive a kiss from the girl. The real Atom Smasher was tied up at a castle in the realms and the JSA All-Stars came to save her. Afterwards, Courtney continued her work with the All-Stars, also attempting to patch up her relationship with Albert, but they soon realized that they both had a need for space.

Retrieved from "https://dc.fandom.com/wiki/Courtney_Whitmore_(New_Earth)?oldid=2805284"
Community content is available under CC-BY-SA unless otherwise noted.