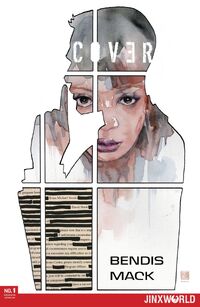 Cover (Volume 1) was a limited series, published by Jinxworld. It was published from 2018 until 2019.

The story is about the fictional comic book writer and artist Max Field. On a comic convention he is approached by a mysterious woman called Julia who says she is a big admirer of his most popular work, the "Ninja Sword Odyssey," buying some of the original artwork. She later reveals that she is working for the CIA and believes Max would be the perfect cover for her current mission.

Retrieved from "https://dc.fandom.com/wiki/Cover_Vol_1?oldid=2726186"
Community content is available under CC-BY-SA unless otherwise noted.