Start a Wiki
It resides in the Tower of Dis, which is the palace in Hell's capital. For the majority of history it was in the possession of Lucifer, though he never wore it, keeping it on a pedestal instead.

The Crown of Horns is the symbol of the ruler of Hell.

It resides in the Tower of Dis, which is the palace in Hell's capital. For the majority of history it was in the possession of Lucifer, though he never wore it, keeping it on a pedestal instead.[1]

When Prince Etrigan raised an army to overthrow the Triumvirate, he claimed the crown for himself and made his mother Ran Va Daath and Abaddon his new Triumvirate. His reign was very short lived however, as Merlin and Jason Blood robbed him of the crown and summoned him back to Earth.[2] 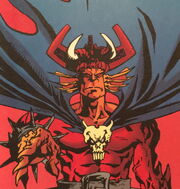 Etrigan wearing the Crown of Horns

With both Lucifer and Etrigan gone, Belial defeated and Beezebub in Masak Mavdil, Hell fell into chaos. After a few years of demon lords warring over land, the Crown of Horns was lost somewhere within the Tower of Dis. The disgraced angels Remiel and Duma were then charged with maintaining order in the Inferno.[3] The Archangel of War, Karrien Excalibris, was not impressed by their efforts. He gathered a host of angels to wage war on Hell and bring order to the universe by claiming the crown for himself.[4] His forces decimated the minor demon resistance and pushed them right back to the Tower of Dis. Etrigan faced Karrien in battle, but was impaled on his flaming sword and flung into a crevasse at the foot of the Tower. Close to death, Etrigan inadvertently stumbled across the Crown of Horns. Placing it on his head increased his strength and powers immeasurably. Fully healed and more powerful than ever, Etrigan defeated Karrien with ease. With the archangel's death, the Demon dropped the crown and walked away. Suspicious of the Prince's apathy, no other Hellion wanted to rule. Lord Kakk was nominated to take the honour, to which he replied, "I'm telling you: anyone wanting to wear that crown would have to be a complete and total lunatic." That prompted Lord Baytor to step forth and claim the crown, making him the new King of Hell.[5]

The crown amplified the wearers powers, and in Baytor's case, several years bearing the crown caused his insanity to consume him. When Etrigan returned to Hell to steal the Ace of Winchesters, he was still in a weakened state with the loss of his heart and required the crown to face the Arkannone. Baytor's madness caused him to attack Etrigan and Kakk upon introduction, killing Kakk. Etrigan evaded the assault and scaled the castle, wresting the crown from Baytor's head, returning him to his former self.[6]
Etrigan rode forth to the Lords of the Gun demanding the mystical rifle and was immediately fired upon. Barely anything remained of Etrigan. With all his remaining strength his skeletal remains recovered the crown which instantly restored his form. He massacred the Arkannone and abandoned the crown once again as soon as he claimed the demon-killing firearm.[7]

Retrieved from "https://dc.fandom.com/wiki/Crown_of_Horns?oldid=2627991"
Community content is available under CC-BY-SA unless otherwise noted.