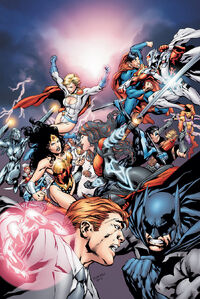 DC/Wildstorm: Dreamwar is a six-issue crossover miniseries published in 2008. As the title suggests, it features the regular characters from the DC universe entering the Wildstorm universe, and the battles that erupt because of this.

In the Wildstorm Universe, several new areas have spontaneously appeared - versions of Themyscira, the Secret Sanctuary, Titans Tower, and the original LSH headquarters. Mister Majestic investigates Titans Tower, only to be subdued by the Teen Titans. However, he is rescued by Spartan. The Titans escape, but Cyborg is left behind. He is taken to the Authority's Carrier. Stormwatch investigate the LSH headquarters (in Russia). The Justice Society comes to Tranquility, asking to settle there.

On the Carrier, Cyborg introduces himself to the heroes. He is suddenly and explosively rescued by the Justice League. The heroes are swiftly defeated, (at the cost of Green Arrow's life) but Midnighter, Jenny Quarx and the Engineer escape through a teleportal door. The Teen Titans attack Gen13 - to the surprise of Gen13, who were operating completely off the grid. In Tranquility, the Justice Society have cowed most of the residents, before blowing up the community centre. The DC heroes reveal that they are operating under the aegis of Chimaera, and they believe that they are better at saving lives than the Wildstorm heroes.

Retrieved from "https://dc.fandom.com/wiki/DC/Wildstorm:_Dreamwar_Vol_1?oldid=2251027"
Community content is available under CC-BY-SA unless otherwise noted.