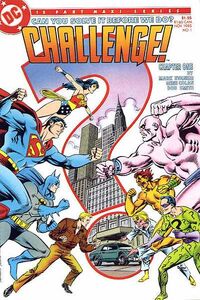 DC Challenge was an experimental limited series published from 1985 to 1986. Each chapter was written by a different author, and drawn by a different artist, and would end in a cliffhanger (sometimes multiple cliffhangers) which the next creative team would have to resolve.

DC Challenge was intended to be "continuity free" and does not fit into the canon of Earth-One, the mainstream DC universe of the time. Crisis on Infinite Earths: The Compendium states that the events in DC Challenge took place on Earth-Thirty-Two.

Since the main characters are for all practical purposes identical to their Earth-One counterparts and the story involves variants of Earth-Two, Earth-S, etc as well, we have indexed it as if it happened on Earth-One rather than create a whole host of redundant pages for Earth-Thirty-Two characters.

Retrieved from "https://dc.fandom.com/wiki/DC_Challenge_Vol_1?oldid=1939498"
Community content is available under CC-BY-SA unless otherwise noted.