"The Menace of Metallo": This story is reprinted from Action Comics #252.

While everyone's asleep, it's my chance to change to Supergirl and look over my new home town! 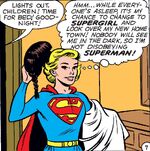 Retrieved from "https://dc.fandom.com/wiki/DC_Silver_Age_Classics:_Action_Comics_Vol_1_252?oldid=2518278"
Community content is available under CC-BY-SA unless otherwise noted.