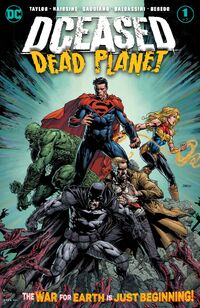 DCeased: Dead Planet (Volume 1) is a mini-series serving as the sequel to DCeased. Taking place five years after the end of the first series, the new Justice League of Earth-2 unexpectedly received a cryptic signal from their home planet sent by Cyborg, rendering them to embark on a mission to rescue their old friend in a dying world that is now overrun with the unliving. The Shadowpact meanwhile lead the charge to save humanity.

Retrieved from "https://dc.fandom.com/wiki/DCeased:_Dead_Planet_Vol_1?oldid=2799885"
Community content is available under CC-BY-SA unless otherwise noted.