DMZ is a super-hero in Dakota City, making him part of the Dakotaverse. He is a member of the street gang known as the Blood Syndicate. His powers were given by a D'amsi alien, and his name is a misheard version of theirs. He almost never speaks or takes off his mask, and he spends most nights attempting to signal extraterrestrials. DMZ was created by Dwayne McDuffie, Ivan Velez, Jr., and Trevor von Eeden, first appearing in the Milestone Media publication Blood Syndicate #1. (1993)

There is also a Vertigo Comics publication titled DMZ. This series is written by Brian Wood, and lasted 72 issues between 2005 and 2012. It takes place in New York City, which has been turned into a "demilitarized zone" during a modern-day civil war. The story follows photographer Matty Roth as he's stranded in Manhattan, and quickly becomes the most important reporter in America. 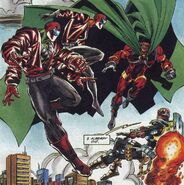