Father... I... I'm sorry. I know... I haven't been perfect. B-but... trying to live up to the greatest crimefighter the world has ever known... isn't easy. What I've done to you... and Dick... has given me so much pain... it tears at my soul. But... I'll change. I'll be different from now on. I'll make you proud of me. I know you had high expectations for me... heights I have yet to achieve. I won't let either of you down... as the next Batman!

This version of Damian Wayne is from a future where he becomes Batman after he is unable to save the second Batman. Damian has some supernatural power and is willing to kill. 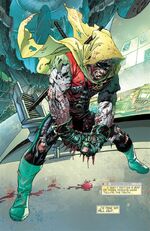 After the death of Batman (Dick Grayson) to some Joker Fish rigged to explode, Damian believed that he had to kill in order to take a more definitive stance on crime than others in the Batman Family, in spite of the attempts of Father James Gordon and Alfred to get him to see otherwise.[1]

After an argument with his father over his newly returned lethal methods left Damian grievously injuring him with a stab wound extremely close to his main artery, he was exiled from the Batcave by Alfred. Crestfallen, Damian went to the church to confess, where his worries were soothed by the priest, who suggested that the best way to atone for his guilt was to bring peace to the people by adopting the righteous and forgiving path of the Batman, one that did not include choosing death as a permissible tool for fighting evil, but rather letting the law decide the fate of the accused. Damian had to learn to forgive himself and earn forgiveness from his father in order to be admired by others for his fighting skills, at which point he would truly become Batman. Taking the priest's words to heart, Damian made some modifications to the traditional Batsuit to fight The Joker as he was sighted around that time, becoming the Batman at last as his grandfather Ra's had demanded of him.

Traveling to the dilapidated Arkham Asylum where the Joker supposedly was sighted, Damian found a lock of red hair and a teddy bear in the Joker's cell, causing him to realize that Professor Pyg had been there. Tracking Pyg to his hideout, Damian found him planning to inject children with a serum that will turn them into Dollotrons. Disgusted that Pyg would use children in his schemes, Damian attacked, forcing himself to be careful with the children who had already been turned, hoping that they could be changed back. Unfortunately, they overcame him and threw him through the window toward the river below.[2]

Though he was successfully rescued from the Gotham River by Alfred, the now very old man died of exertion soon after helping with his injuries. Damian was wakened from his sleep by Alfred the Cat, who leap onto his gurney, rousing the young man with warnings spoken in Alfred Pennyworth's voice. The cat warned that Pyg and his henchmen were at work again, meaning it was time for him to get back into action as Batman.

Across town, Jackanapes and a cadre of intelligent animals piloted a school bus full of kidnapped children to Professor Pyg's hideout. Before they could arrive, Batman crashed through the windshield, quickly and brutally taking the thugs down with non-lethal techniques, despite its challenge. Though the children were shaken by the experience, Damian hoped that it would not stunt their emotional growth, and left the police to handle the rest.

Damian decided to return to the church and demonstrate that he followed the priest's advice. In the confessional box, Father James Gordon warns that while Professor Pyg was apprehended, the Joker remained at large. Damian realized suddenly that he'd never mentioned the Joker to the priest, and demanded to know how he knew about it. Rushing to open the opposite door, he found the booth empty.

Alfred Pennyworth's body was interred in a quiet ceremony, given that so much of his life had been consumed by his service to the Wayne family, so he had few friends to mourn him. Afterward, Damian confided in the cat that his father Bruce was doing better following the injury he sustained during a fight with Damian. He hoped that after what he did, and what happened, Bruce would forgive him. Though he was uncomfortable speaking to a talking cat, Damian turned his mind to the Joker, noting that he needed help to track him, and, with the cat's agreement, decides to go to Bruce for help. However, upon arriving in Bruce's room, they found his gurney empty, and only a Joker themed playing card in his place. The card led Damian to the docks, and in a nearby warehouse, he discovered his father, bloodied and tied to a post. As he attempted to approach, the lights flicked on, and he was faced with the Joker and his followers - not the real Joker, but a follower of his legacy.[3]

Despite successfully and non-lethally taking down all of the Joker's followers, Damian had left the Joker untouched. The Joker commented that he and this Batman had something in common: trying to live up to a predecessor's legacy by dressing up like them - but the new Joker intended to gain recognition in the criminal community by killing both Bruce Wayne and the Batman. Unwilling to let it end like that, Damian unleashed a brutal attack on the Joker, beating him to a pulp. Crumpled and weak, the Joker wheezed that regardless, he would only serve time, and then he would be back, as the Joker always comes back. Angry at this, and not willing to do as expected, Damian cut the jester's laughter short by tearing open his gut before gathering Bruce in his arms and limping away.

As news of the real Joker's return reached the public, the pressure was on Damian to prove himself as the Batman who succeeded, even with a no kill policy. Gotham City was in a grim state, and it would fall to Damian to set things right, for the sake of Gotham's good citizens, a task to which Damian dedicated himself as well as finding out who the killer of Dick Grayson truly was.[4]

He seems to have developed a rivalry with Commissioner Barbara Gordon (who strongly condemns his actions, claiming he killed someone close to her). When asked why she hates him so much, she says, "That monster was responsible for the death of...of a good friend. He can't be trusted". Damian as Batman is cruel and darker than his father, more willing to injure and kill opponents if he judges it to be necessary to do so and possesses some form of supernatural ability (most visibly, the ability to heal catastrophe wounds in moments). It is implied that Damian made a literal deal with the Devil: his soul in exchange for the immortality and healing abilities he felt he needed to protect Gotham.

Sometime during his tenure as Batman, Michael Lane, the former Azrael, returns to Gotham insanely obsessed with destroying Batman at the behest of his master, Simon Hurt. Dressed in his old Simon Hurt "substitute Batman" costume, Lane kills five of the top Gotham mob bosses, including Phosphorus Rex, Professor Pyg, Loveless, and Candyman. Commissioner Gordon thinks Batman is responsible for their murders, but quickly sees the light as the Dark Knight publicly confronts Lane. After defeating Nikolai, the Weasel, Jackanapes, Max Roboto, and Eduardo Flamingo, the Dark Knight not only defeats Lane, but executes him.[5]

After that was settled, one of Damian's current enemies, 2-Face-2, along with his hired goon Max Roboto, steals The Joker's old joke-book and takes over Gotham's new artificial climate control system, causing it to rain Monster Serum and Joker Venom all over the city. The majority of Gotham's citizens are morphed into crazed Joker-ized zombies. The double-faced villain also kidnaps an infant named Terry McGinnis and shoots him up with Joker Venom. Batman takes out Roboto and confronts his boss in Carter Nichols' old lab. After defeating 2-Face-2, Batman watches with surprise as Nichols from the year 2010 appears and kills Nichols from this time. In a twisted form of suicide, Nichols murders his older self to "spare him" from the horror of the current era, sends the corpse back to 2010 where it is discovered by police and ruled as a suicide in that time. Meanwhile, Nichols is free to travel the timestream as he pleases, since the world believes that he died fifteen years ago. Batman then gives an antidote to the Joker Venom/Monster Serum to baby McGinnis, who will become Batman in about twenty-five years later, being mentored by none other than Damian himself.[6]

However very soon, the entire planet was falling into chaos. In a government-quarantined Gotham, Batman and Commissioner Gordon fight off the remaining populace, that were Joker-ized. Per Damian's mother, Talia al Ghul's orders, Simon Hurt (who is revealed to have ascended to the highest levels of the American government) authorizes a nuclear strike on Gotham, wiping the city clean off the face of the planet.[7]

Damian was able to survive the blast due to his deal with Doctor Hurt. One Christmas, he was attacked by his maternal grandfather, who blamed him for turning the world into a nuclear wasteland. Damian considered killing him, but he didn't want to kill the last of his family and tarnish the legacy started by his father. He allowed Ra's to lethally assault him, and once he calmed down, the two spent the holiday together.[8]

Retrieved from "https://dc.fandom.com/wiki/Damian_Wayne_(Batman_in_Bethlehem)?oldid=2802790"
Community content is available under CC-BY-SA unless otherwise noted.