I'm not like Tim, or Jason, or even Dick. I'm light-years ahead of all the past Robins in skill and training. I'm either your partner in this or I'm not.

Damian Wayne is the son of Batman and Talia al Ghul. This makes him an heir to the world's greatest crime-fighter, and its greatest super-villain Ra's al Ghul. Damian became the fifth Robin, working alongside his father as Batman.

Damian Wayne is the son of Batman and Talia al Ghul. Raised by Talia and trained by the League of Assassins, Damian became a skilled assassin by an early age. Coupled by his innate talent for the art and his lineage, Damian became a respected member of the League. Eventually, when Damian finally met his father, Batman, Damian defected and joined his father's cause. Batman granted Damian the mantle of Robin, and Damian became his father's latest crime-fighting partner.

After Bruce's death in the Final Crisis, his first protégé Dick Grayson took over the mantle of Batman and Damian became his Robin. Alongside Grayson, Damian faced new threats such as Doctor Hurt, Professor Pyg and Flamingo.[2] 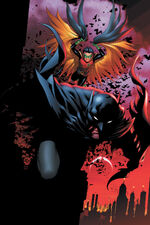 After his father's resurrection, Bruce and Damian began patrolling together as Batman and Robin. Bruce tried teaching Damian, still a cold-hearted assassin, about the sanctity of life, but had trouble relating with his son.[3] Damian began showing restraint, which Bruce commended, although Alfred still criticized him for not being supportive enough.[4] Bruce bought Damian a dog named Titus. They were both targeted by a super-villain named Nobody.[5] They were kidnapped by Nobody, who tried to show Batman that his no-kill methods were ineffective. He encouraged Robin's darker side and tried to take him as an apprentice.[6] Robin angrily left the Batcave to work with Nobody, who asked him to execute a criminal.[7] Robin revealed that he was lying, and refused to betray his father. Nobody decided to torture Robin, continuing his personal vendetta against Batman.[8] When Batman discovered their location, he beat Nobody mercilessly and came close to killing him, but stopped when he realized Damian was watching the fight. Nobody swore that he would return and kill their friends, so Damian killed him with a move Nobody had taught him.[9] Though deeply shaken by the killing, Bruce reacted with compassion rather than anger. When Damian regained consciousness, they talked about how difficult it is for Damian to adjust from the life of an assassin. Despite their differences, they played ball with Titus and began to enjoy spending more time together as father and son.[10] 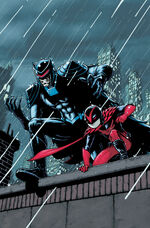 Damian as Redbird with Jason Todd as Wingman

Batman and Robin began working together against Damian's mother Talia al Ghul, revealed as the head of Leviathan. During a fight in a meat factory, Damian converted to vegetarianism and adopted a pet cow who he named Bat-Cow. He was believed dead when he was shot in the head by an assassin named Goatboy.[11] It was revealed that Talia had created another clone as his replacement, the obedient fully-grown Heretic.[12] Robin was shown to have faked his death, and is confined to the Batcave at Batman's orders. To avoid the bounty Talia placed on his head, he began using the name Redbird and switched to a new costume.[13] This allowed him to team up with Jason Todd, who was using the Wingman identity. They worked together with Batman Incorporated to take down the League of Assassins' top killers. However, Batman told Damian he had to quit crime-fighting altogether.[14] Bruce revealed that he has seen Damian's future, as told through "Batman in Bethlehem". If Damian did not retire, his actions would lead to a plague that would force the President to nuke Gotham.[15] Batman Incorporated fought Leviathan in the streets, while Damian was forced to stay inside. Alfred Pennyworth got him a cat to take care of, who he also named Alfred.[16] Damian refused to stay home while his allies were dying, and Alfred allowed him to leave knowing he could not be stopped.[17] He flew his exo-skeleton into the center of the battle, where Leviathan had taken over Wayne Tower. He neutralized the child soldiers, and teamed up with Dick Grayson to take down the remaining assassins. The Heretic flew Grayson aside, and challenged Damian to a sword-fight. Despite his bravery and refusal to give up, Damian was impaled through the chest and killed.[18]

After various trials and tribulations involving his corpse, mainly revolving around Ra's al Ghul and Apokolips, Batman managed to rescue his son's body and, through using the Omega Sanction infused within a Chaos Crystal shard, brought Damian back to life within the Batcave.[19] 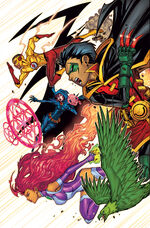 On his 13th birthday Damian was sent a package by his grandfather Ra's al Ghul, which contained a dead robin. After meeting with his mother Talia, he discovered that it was a warning from his cousin Mara al Ghul, who had chosen him as her prey as part of an initiation ritual she must undertake in order to properly join the League of Assassins. Mara had been made leader of a group known as the Demon's Fist, which was originally supposed to be led by Damian but became hers when he chose to leave the League. They too had chosen targets that they must hunt down in order to ascend to the League. Damian decided to collect the other Demon's Fist members' targets in order to form the new Teen Titans; comprised of Starfire, Beast Boy, Raven and Kid Flash.

In the Name of the Father 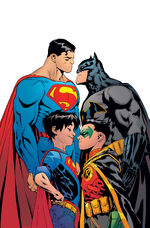 While searching for a tree for Christmas,[20] Jonathan Samuel Kent accidentally torched some woodlands near a swamp in Hamilton. He was subsequently rescued by Maya Ducard, the daughter of the villain Nobody, and Damian's pet dragon-bat Goliath. Jon later awakened in the Batcave and found out that Robin had been keeping him under surveillance for a long time. The two initially did not get along, and the situation was further complicated when Batman and Superman arrived, blaming each other for the conflict.

The ensuing melee was abruptly averted when Jon used his Freeze Breath to separate the two sides and allow him to explain the situation to his father. While their fathers were discussing the lab tests that Damian had performed on Jon, the two boys went off to look at Damian's pets. However, due to Damian's snide remarks and goading, Jon lost his temper and another brawl broke out between them. This was also put down quickly as Batman and Superman looked down on them in furious silence.[21]

In order to properly discipline their sons and teach them the value of working together, Superman and Batman had them undergo a series of challenges. However their lack of teamwork and animosity toward each other caused them to fail every challenge. The boys finally managed to put aside their differences and worked together in order to save their fathers from an apparent threat in the Batcave, but this later turns out to be a ruse.[22] At this point, Alfred declared them to be the Super Sons. 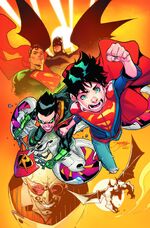 Jonathan was paid a visit by Robin, posing as both his school's bus driver and his substitute teacher.[23] He was later unwillingly recruited by Damian to help him investigate a series of break-ins at LexCorp. This misadventure was further complicated with the appearance of Lex Luthor, who tried to capture them both.[24] The two boys managed to escape Luthor and followed a lead to a home in Providence, Rhode Island, where they encountered a family who still retained their powers from the Amazo Virus. However, one member by the name of Reggie Meyer was driven insane by the excessive use of his powers and took the alias of Kid Amazo. He had also stolen the Amazo Armor from LexCorp and had planned to use it and the abilities of the Super Sons to lure the Justice League into a trap.[25] Thanks to the arrival of Lex Luthor and aid from Reggie's super-powered sister Sara, Kid Amazo was taken down. Not wanting to explain themselves, Robin and Superboy quickly left the area and headed back to Hamilton. However, their absences from their respective homes did not go unnoticed as they encountered both Lois Lane and Alfred Pennyworth while trying to sneak into Jon's home.[26]

The boys were subsequently punished by their respective parents. Batman forbade Robin to go crime-fighting for a week while Superboy was forced to do his chores without using his superpowers.[27] With the prospect of moving to Metropolis on his mind, Jon eventually ran off and headed to Gotham to speak with Damian in the Batcave. This resulted in another argument and a short fight, before Alfred arrived. They were later joined by Batman and Superman, and worked out their differences. With Superman's and Batman's permission, the two boys would be allowed to go on their own, provided that they would do so together.

Damian aided in fighting the Dark Knights upon their invasion, forming the Gotham Resistance with Green Arrow, Killer Croc, Nightwing and Harley Quinn. They lost Croc, the Teen Titans and the Suicide Squad, but they defeated Mister Freeze, Riddler and Damian's evil Earth -22 self and made the discovery that beings from the Dark Multiverse can be killed by Nth Metal.

Retrieved from "https://dc.fandom.com/wiki/Damian_Wayne_(Prime_Earth)?oldid=2639345"
Community content is available under CC-BY-SA unless otherwise noted.