The creator of the Multiverse, Perpetua, after having been released by Lex Luthor, fought the Justice League with him by his side. She ordered him to go after the [[Bruce Wayne (Earth -22)|Batman W

Perpetua; The Batman Who Laughs

Scott Snyder · Greg Capullo
Dark Nights: Death Metal is a 2020 event written by Scott Snyder with art by Greg Capullo. The event picks up after the Year of the Villain, with Perpetua taking over the Multiverse with the help of her new lieutenant The Batman Who Laughs, who has been allowed to freely rule over Earth 0 in return.

The creator of the Multiverse, Perpetua, after having been released by Lex Luthor, fought the Justice League with him by his side. She ordered him to go after the Batman Who Laughs as the Dark Multiverse was a threat to her, and Laughs soon surrendered after fighting him with his Secret Six. This was a mere ruse, he had come to know about Perpetua after he had started serving Barbatos and was always planning to persuade her for his own nefarious purposes.[1][2]

While convincing Perpetua to make him her new lieutenant, he informed her that the Justice League had been whisked away to safety by the Quintessence despite her believing that they were dead.[2] The Quintessence had given the Doctor Manhattan's energy consisting of the the seven positive forces of the universe, after he had failed to fix the timeline, to the League in order to combat her. Perpetua fought them with the seven negative forces she was powered with and both the energies were drained. Laughs however helped her regain strength using the Dark Multiverse, whose unending crises made it a hub of the negative energies.[3]

Having gained more power than ever before, Perpetua took over the Multiverse and proceeded to reshape it as how she wanted, while rewarding Laughs with Earth 0. Laughs invaded the world with Evil Batmen and his new Dark Knights.[3] One-by-one all the heroes fell to the Dark Nights who were invading the world. Captain Atom's death resulted in the western coast of the United States being destroyed. Themyscira too was destroyed when Batmage unleashed Hell's hordes upon it. As the Justice League arrived, they found the world in chaos. They decided to split up but it proved to be their undoing, as they were easily outmatched.[4] Wally West who had been trying to fix time and reality by merging various timelines, was stopped by the Batman Who Laughs[5] who utilized Perpetua's power and snatched away the Mobius Chair.[6] 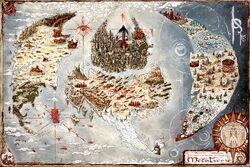 The Leaguers soon surrendered or were beaten except for Batman and Barry Allen who tried to call to others to unite together to fight, but found they were alone. The surrendering heroes were given their own domains to rule (with his Dark Knights keeping a watch) as the Batman Who Laughs twisted the world however he wanted. The rest of the heroes were imprisoned in New Apokolips, created by Darkfather from the core of Earth's Sun, which had been burnt out after the League's battle with Perpetua. Superman was made perpetually power the Sun so Earth could remain habitable.[4]

The irradiated west coast was split off from the rest of the United States into the "Arkham Wastelands", now inhabited by mutated life, and given over to Harley Quinn who ruled under Dr. Arkham. The east coast too was split off from the rest of the country and transformed by Darkfather's technology into a land called "Megapokolips". It also contained thousands of lantern rings of various corps who had been killed after the invasion of Earth, in addition to Metropolis. Gotham City was split off and expanded into a continent of its own, replacing Canada, a dystopian mega city containing the Batman Who Laughs' headquarters called Castle Bat.[4]

The rest of the United States was turned into a hellish landscape aptly termed the "Hellscape", with Themyscira (now turned into the new Hell) and Gemworld being made its part. Wonder Woman was made the warden of Themyscira, where all villains were imprisoned by the Dark Nights. Skartaris replaced Mexico and became a frozen landscape. The Rock of Eternity fell in Fawcett City and unleashed the Seven Deadly Sins of Man. The control of the world's oceans was given to Aquaman, who oversaw them under Bathomet and the mechanical Black Fleet.[4]

Retrieved from "https://dc.fandom.com/wiki/Dark_Nights:_Death_Metal?oldid=2860536"
Community content is available under CC-BY-SA unless otherwise noted.