I will summon Death.

Darkseid was a member of the New Gods based on Apokolips, obsessed with subjugating the will of all sentient beings with the Anti-Life Equation.

Darkseid was a New God and the ruler of Apokolips. He was also the brother of Highfather, the ruler of New Genesis, and the father of Orion. The two engaged in a drawn-out war, before agreeing to exchange their sons Scott Free and Orion, adopting them to create peace. Scott however escaped to Earth and became the hero known as "Mister Miracle".[1]

Darkseid later started coming into conflict with Earth's heroes and at one point, initiated an invasion of the planet, but he was soon thwarted by the Justice League. However, his cosmic scheme at that moment mainly involved abducting the Justice League member Cyborg from Earth and implanting his body with a modified version of the Equation that would act as a techno-organic virus that would spread via telecommunications. Darkseid subsequently summons the Black Racer to ensure that Cyborg will not die as he transmits the Anti-Life Equation onto him. The plan backfired by tainting the equation, and infecting Darkseid himself into the Anti-Living. The crazed god plunged into the raging inferno at the heart of Apokolips and caused it to explode.[2] 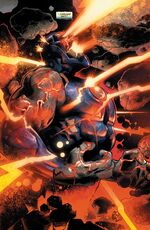 Though people had presumed him dead, Darkseid was actually trapped within the frozen core of the destroyed Apokolips. Due to the New God Metron smashing Mister Miracle into it, it developed cracks, which allowed the crazed Darkseid to break free of his prison, something Izaya had felt far away at New Genesis. He soon flew to New Genesis itself and started attacking it, before beating down his son Orion.[1]

Retrieved from "https://dc.fandom.com/wiki/Darkseid_(DCeased)?oldid=2852813"
Community content is available under CC-BY-SA unless otherwise noted.