Sphere of the Gods

The most powerful beings of this Earth...CRUSHED and HELPLESS at my feet. And once this planet is consumed...I'll send my forces out to slaughter any ragtag survivors who slipped through my grasp. Such is the annihilation that is Darkseid!

Darkseid is the tyrannical ruler of Apokolips, a sadistic, aggressive and merciless tyrant who has invaded and conquered multiple worlds throughout the entire Multiverse. As the God of Tyranny, Darkseid seeks to enslave all things to his will using the Anti-Life Equation.

In another universe, the Old Gods were immortal beings who relied on the prayers of mortals to remain in power, but nevertheless cared nothing about them. Soon the rebellious Uxas began putting lies and corruption in the minds of these Gods which sparked a war between them. As the gods began to die, Uxas began stealing the Gods' power for himself.[3]

Eventually, when his father Yuga Khan came to strike down both him and his brother Izaya for their insolence against the Old Gods, he used the Anti-Life to revive the Olds Gods Uxas murdered, but was ultimately slain by his own son[4] who took the fallen Gods' power to become the New God Darkseid.

As eons passed, Darkseid created the hellpit of Apokolips and has remained as its sole ruler, with the only force capable of opposing him being his brother Highfather and his forces of New Genesis.[5] At some point, he captured an aspect of Death in the form of the Black Racer to become his greatest weapon, but he couldn't command it unless it were anchored to a sentient host.[6]

Darkseid conceived many sons; one, Kalibak, became a brutal warrior of Apokolips while another, Orion, was traded for Highfather's own Scot in a promise of peace between both planets.[7][8]

Some time ago Darkseid came across Myrina, an Amazon from a parallel universe and conceived another child with her, a daughter named Grail,[2] who unbeknownst to him was being raised to destroy him.[9]

One day, a mischief-maker named Kaiyo, defied Darkseid's authority by laughing at his law, prompting him to pursue her across universes she would escape through. In one of those he found a champion, Superman, whose might rivaled his own. Jealous, Darkseid declared war on that planet[3] and began collecting four powerful Female Furies, K'li, Famine, Pestillence and Death, from that universe to use in the final battle. Death became impregnated with Darkseid's child, Deathspawn.[10]

While his armies destroyed the forces of that particular mortal world, in his search he found a cabaret of other parallel worlds, each with their own iteration of Superman.[3] Eventually he would come to another universe harboring another Superman. Like the first time, he went to confront him personally,[11] easily overpowering the Kryptonian's allies and managing to defeat and capture Superman.[12] However, the combined assault of Earth's defenders proved to be enough distraction for Batman to release Superman, who pushed Darkseid through a Boom-Tube for Cyborg to send to Apokolips, away from Earth.[13]

Defeated, Darkseid decided to focus on his war against the other Earth, targeting the planet as the sacrifice for Apokolips' rebirth, and thus started the creation of a clone of that Earth's Superman to spread his will among the humans and prepare the planet for his arrival.[3]

Five years later, Darkseid sealed himself at the Mobius Chamber in the heart of Apokolips when he was visited by his adopted son, Mister Miracle, who demanded him to reveal the truth about his origin, but Darkseid remained silent and ignored him. This angered Miracle to the point of attacking the evil God with the intent of destroying him, but he unwillingly set him free.[14] Darkseid easily defeated Mister Miracle and offered his ally Fury to join him against Earth, an offer she accepted. After imprisoning Miracle, he was visited by the Traveler who offered him a deal with New Genesis: feed on that Earth only and Highfather will not interfere.[7] 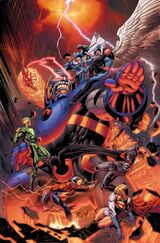 Darkseid vs. the Wonders of the World 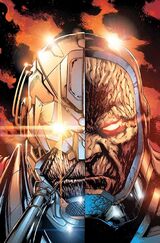 The Dark God vs. The Anti-God

Darkseid sent his Fury Lashina and the assassin Kanto on a hunt for his daughter's mother, while he returned to his throne room and came across Mister Miracle. The escapist confronted Darkseid but he once again proved to be stronger, thus Miracle was forced to Boom-Tube to Earth, to which Darkseid remained indifferent.[21] The Anti-God arrived on Earth while Superman and an extra, Lex Luthor, were sent to Darkseid's domain by Lena Luthor, another emissary of Apokolips. Darkseid commanded his forces to mobilize with his war plan, ordering his right hand DeSaad to unleash the prisoners in the slave camp, sicking them on Kal-El and Lex. He also commanded his General Steppenwolf to take his firstborn Kalibak with them in the war effort against Mobius.[9]

Afterwards, when the child of Superwoman and Mazahs was born and taken by Grail, the child absorbed the Omega Effect from Lex Luthor as well as the Anti-Life Equation from Steve Trevor becoming the new Darkseid temporarily, before being separated from the Anti-Life Equation and reverted into a child form of Darkseid taken by Grail to be raised.[1]

Some time after the invasion of the Dark Multiverse Grail began killing Old Gods such as Hercules and absorbing their power. She would then give the power to Uxas to make him grow stronger and grow closer to becoming Darkseid again. After absorbing Hercules' power Uxas transformed into a much older child around the age 11 or 12 in human biological standards. After aging to a young adult, he fights Zeus himself. During the fight, he reveals that killing Hercules and the rest of Zeus' children was just bait for Zeus himself. He kills Zeus, absorbs his power, restores his own and escapes with Grail.

Darkseid survived his encounter with Wonder Woman, and being able to manipulate the Justice League of space to gather information about them being deities of the Ghost Sector.

Retrieved from "https://dc.fandom.com/wiki/Darkseid_(Prime_Earth)?oldid=2852822"
Community content is available under CC-BY-SA unless otherwise noted.