Death of the New Gods (Volume 1) 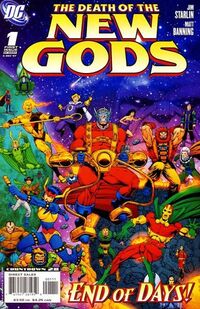 Death of the New Gods is an eight-issue miniseries published between 2007 and 2008, and tying into Countdown. The event is fairly self-explanatory, the series features Superman and some of the New Gods trying to determine the identity of a mysterious assassin who is systematically and indescriminately killing off New Gods on both Apokolips and New Genesis.

Retrieved from "https://dc.fandom.com/wiki/Death_of_the_New_Gods_Vol_1?oldid=2668230"
Community content is available under CC-BY-SA unless otherwise noted.