"Apocolypse Now! 7 - Boom!": Glenda Mark stands before the tortured, bleeding, and unconscious form of Jason Blood tied to the wall of the missile room. She kisses Jason and confesses her love for him, but he his unconscious ears hear none

Where 'er Lobo is, I'll track him down. No more he'll play the trait'rous clown. I'll roast his flesh -- Damn his soul to Hell. Then I'll steal his bomb -- And drop it myself!

Glenda Mark stands before the tortured, bleeding, and unconscious form of Jason Blood tied to the wall of the missile room. She kisses Jason and confesses her love for him, but he his unconscious ears hear none of it. Realizing that there in only one way to save Jason, Glenda begrudgingly recites the poem needed to release the Demon Etrigan. Etrigan easily breaks out of his bonds, and kisses Glenda as thanks for releasing him. Glenda pushes Etrigan away, disgusted with him, but Etrigan only laughs. 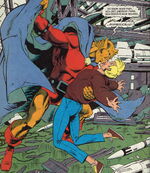 Etrigan kisses Glenda for freeing him

The Demon remembers the situation, after they defeated Klarion's gang, Lobo drove off with an h-bomb, headed for Meggido, Israel. Etrigan lists off the vile things he'll do to Lobo before dropping the bomb himself, and teleports away in search of Lobo, leaving Glenda with the unconscious form of Klarion. But just then, Randu, Harry, and the Phantom Stranger arrive. The three see Klarion's body, and Glenda explains that she had to attack him to save Jason. Glenda gives them the skinny on the bomb, and Phantom Stranger reveals to them how the bomb is so powerful, and how it will effect earth.

Meanwhile, Lobo speeds through the skies on his space hog, with the bomb in tow. Etrigan teleports, and lands on top of Lobo. As the space hog spirals out of control, the two begin grappling while falling through the air. Back at the base, the Stranger explains that every 26,000 years, earth completes its orbit, but halfway through the cycle, the earth vibrates at a higher frequency then normal. He says that Lobo will drop the bomb on a fault line in Meggido essentially destroying the planet. None of them see the recovered Klarion sneak away to another part of the facility. Klarion finds Teekl's mangled body, but the cat wakes up and heals, returning to normal. Elsewhere, Etrigan and Lobo continue to duke it out in the air while plummeting towards Meggido rather quickly. Lobo finally manages to throw Etrigan off of his hog, and dives off of it, falling after Etrigan. Meanwhile, the Stranger explains that the bomb will be more than enough to cause a massive earthquake, which will cause a chain reaction, resulting in the earth's destruction. Back at the base, Klarion and Teekl wander around outside, and find C'th's power rod. They use it against several soldiers that find them.

Back at Meggido, Etrigan and Lobo fight with each other as they approach the ground. Neaby military bases see them, and begin firing at them as they fall. Stray bullets from the army's guns snap the ropes holding the bomb to Lobo's hog. As the pair fight, they see the bomb fall past them. Meanwhile, the Stranger finishes his account of what will happen to the earth if the bomb does blow up on Meggido. Randu suddenly gets a pain in his head, and it alerts him to the spell that Klarion is casting on Etrigan and Lobo outside. Phantom Stranger tells Harry to throw his magic in with Klarion's. Puzzled, Harry agrees, and begins using his magic along with Klarion. In Meggido, Lobo decides to leave, and his hog catches him out of the air. Etrigan does the same, and teleports himself away. But before either of them can leave the scene, they both notice Klarion's magic beginning to take effect. The magic works, and a shield is created around Meggido. Inside the shield, the bomb explodes. Lobo and Etrigan are both blasted in separate directions and Lobo is throw safely back into space. With the bomb safely contained, and no innocent lives lost, the throwback at the base wait to see if it worked. After a moment, the Stranger informs them that it worked. As they begin to celebrate, Glenda remembers that Jason, or rather, Etrigan, was in the vicinity of the blast. The Stranger tells her that even power of the Demon could not haver survived without diminished or unaltered. The Stranger tells her that though she may have lost Jason, his sacrifice for the world will be remembered. With that, he leaves.

The military raid the base later,only o find the comatose Tenzin Wyatt. Klarion and Teekl drive back to Gotham City, but Teekl teleports them to a theme park. At the temple of the Green Dragon Society, the other members throw Guru Chud's corpse off of their mountain, and they promptly disband the Green Dragon Society and leave.

Retrieved from "https://dc.fandom.com/wiki/Demon_Vol_3_15?oldid=2417234"
Community content is available under CC-BY-SA unless otherwise noted.