I had been playing the game on the detective's terms. Taking one step forward past each step he had taken to beat me. If I designed a crime with one degree of complexity, he would come back with two degrees of complexity in his means of defeating me. Beating him would require an exponential leap forward. And I spent a year in a room doing just that. I knew to win I would need to become the man I would become after twenty years of battling him, without him evolving in kind. The man who left that room wasn't the man who entered. He was the Designer.

The Designer was a mysterious masked criminal mastermind during the 20th Century who became a legend in the criminal underworld for his minutely thought-out plans. His infamy led him to Gotham City, and, in a roundabout way, he became an enemy of Batman. 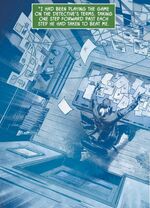 The beginning of the Designer

The Designer started out as a criminal in the 20th Century and came into conflict with the genius detective Cassander Wycliffe Baker, thinking of him as nothing more than an irritant getting in way of his loot. As Cassander repeatedly spoiled his plans however, the Designer realized he needed to be smarter with his plans. Their complexity grew, however he would still fail to beat his enemy.

After 20 years of their rivalry, he realized he needed a foolproof plan that his opponent could never beat and worked on an infallible grand plan for a year. When he succeeded at making one, it was the first time he took on the identity of "The Designer". The plan worked as expected, causing Cassander a massive amount of humiliation and terror, which made him go into retirement.[1][2][3]

At the age of 60, the Designer had become a criminal legend reputed for being able to pull of anything, and also created a chemical that allowed him to make corpses act as per his wishes like a voodoo zombie.

Early in Batman's career, the Designer watched with interest how the vigilante and detective repeatedly spoilt the plans of his enemies in Gotham, a similar experience to his own past which created a desire in him to help them and secure his legacy with one final master plan.

So, the Designer went to Gotham and contacted four of the Bat's greatest enemies - Catwoman, the Joker, the Penguin and the Riddler, meeting them at his hideout called the "Tartarus House", located outside Gotham City. After explaining why he had invited them, he offered to help them get whatever they wanted by creating infallible plans for them.[1][4][3]

After creating plans for Catwoman, Penguin, and Riddler, he finally sat down with the Joker to discuss the clown's master plan. However, the Joker's wish, he told him, was that he wanted to become just like the Designer and take his place. The Designer realized it would mean he would have no future and ordered his zombies to kill the criminals but was shot by the Joker in the back of the head.

Swearing to keep the night they had a secret, the villains then destroyed the Tartarus House and buried the Designer's body in a graveyard.[1]

Many years later, the Joker decided to have a final war with Batman when Superman decided to reveal his identity to the world.[5] 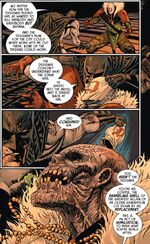 For this purpose he dug up the Designer's corpse and used the man's own resurrection formula on it to make everyone believe the criminal mastermind was still alive. The Joker then used the plans that the Designer had created for Catwoman, Penguin, and the Riddler in the past to finally defeat Batman.

As part of these plans, "the Designer" hired five of the world's highest-paid assassins to distract Batman while Joker used Catwoman's design to steal Bruce Wayne's wealth from Wayne Enterprises.[6][4]

Batman eventually confronted the Designer at the Tricorner Yards and, after detailing what his plan originally was, engaged with him in a swordfight. During the fight, Batman revealed he had caught on to what was happening and that the Designer wasn't really alive, but just a corpse controlled by the Joker. As Batman talked to Joker about what he was after through the Designer's corpse, the distraction allowed Deathstroke to stab him through the femoral artery.[4]

The Desinger's corpse was discarded as the Joker War continued to escalate.

Retrieved from "https://dc.fandom.com/wiki/Designer_(Prime_Earth)?oldid=2800349"
Community content is available under CC-BY-SA unless otherwise noted.