"Batman: "The Batwoman"": Kathy Kane, an heiress and former circus aerialist, becomes the Batwoman to aid Batman and Robin in their fight against crime, but Batman fears that her success thus far has been due to luck.

Batman, I give you fair warning... If you ever should penetrate my secret, you'll be automatically revealing your own identity!

Synopsis for Batman: "The Batwoman"

Kathy Kane, an heiress and former circus aerialist, becomes the Batwoman to aid Batman and Robin in their fight against crime, but Batman fears that her success thus far has been due to luck. 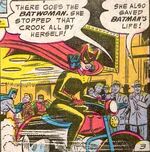 On her first crime fighting adventure, Batwoman captures the criminals without the need of Batman and Robin and she gives Batman a word of advice not to try to learn her secret identity or she will reveal his own. As they try to stop her, she uses her own Batcycle to outrace the Dynamic Duo. On following occasions, Batwoman manages to save Batman from a certain danger using her various gadgets and weapons, allowing the Caped Crusader to defeat his enemies.

A few days later, Bruce Wayne is invited to Kathy's party on her mansion and the two of them share a moment, not knowing their secret identities. When the Bat-Signal appears in the sky, the two of them make up some excuse in order to leave the party and they change into their crime-fighting costumes.

Batman and Robin are informed about the recent crime, but Batwoman manages to outrace them once again to arrive first. Batman instructs Robin to stay on the outside of the building, while he goes inside to prevent Batwoman from getting into trouble. Once inside, Batman saves Batwoman from being knocked out by the criminal, but he receives the blow to the head. Batwoman uses a net from her utility bag/purse and she captures the thug. Batwoman approaches the unconscious Batman and realizes that she could learn his identity at that very moment, but she decides not to do it. When Robin enters the place, Batman recovers and they take the prisoner to the police.

Once outside, Batman deduces that the crook was being used as a distraction while his accomplices steal from another place. Batman and Robin start going to that place and Batwoman follows them closely. Once they reach the crime scene, the Dynamic Trio capture the criminals, but Batman allows Batwoman to deliver them to the police, while he and Robin go to investigate something more important.

In the Batcave, Batman investigates the background of certain people he suspects of being Batwoman until he finds the profile of Kathy Kane, who perfectly matches Batwoman's description and abilities. When Batwoman returns to her hideout, Batman and Robin are already waiting for her and Batman asks her to give up her crime-fighting crusade. Kathy threatens to reveal their secret identities using the information gathered by her surveillance system, but she decides to turn all the information to Batman and do as he asks.

Back in the Batcave, Batman and Robin contemplate their latest trophy, a portrait of Batwoman and they wonder if they will ever work again with her as a team.

Appearing in Batman: "The Batwoman"

Synopsis for Martian Manhunter: "The Ghost from Outer Space"

When Gus Bartley, the notorious gang leader is killed in an apparent accident, Martian Manhunter poses as his ghost in order to get the superstitious gang members to confess to murder.

Appearing in Martian Manhunter: "The Ghost from Outer Space"

Retrieved from "https://dc.fandom.com/wiki/Detective_Comics_Vol_1_233?oldid=2689827"
Community content is available under CC-BY-SA unless otherwise noted.