"Paint a Picture of Peril!"

Paint a Picture of Peril!

Appearing in "Paint a Picture of Peril!"

Synopsis for "Paint a Picture of Peril!" 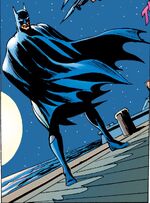 The Dark Knight is Back

In the middle of the night, a group of mercenaries emerge from the water and climb to the docks of Gotham Bay, the place of an Art Exhibit held by Bruce Wayne. They take down the guards and a couple of them get inside one of the art galleries. Meanwhile, the group left outside is attacked by Batman, who manages to take a couple of them down before he finds himself outnumbered. The mercenaries use their harpoons to attack Batman, who collapses back to the water, giving them the chance to escape with one of the art pieces. Batman had managed to deflect one of the harpoons with his cape, but the second harpoon injured his left arm. When Batman reaches the surface, he takes a look at the missing art piece and realizes that it was one of the least valuable paints of a mermaid.

Moments later, Bruce returns to his penthouse at the Wayne Foundation and takes care of himself and his wounded arm. As he is thinking about a way to follow the mercenaries, the cleaning lady, Mrs. Cathy, enters the place and retrieves her purse and turns off the TV, which was broadcasting a show about an eccentric millionaire living in Gotham City. Mrs. Cathy's contempt was obvious, but Bruce didn't noticed it. Bruce keeps thinking of a way to follow the criminals and he remembers a lead to their whereabouts in the underwater weeds of the sea.

Using a special motorsled, Batman is able to track down the criminals to a strange location, which resembles an old European castle. In order to break inside, Batman has to take down the armed thugs in the walls of the building and once he gets in the inside grounds, he has to break into the main building. Using the trees as his cover, Batman jumps to the windows of the castle, where he is able to see an eccentric man inside, talking to several art pieces, all of which resembled the same female figure. Batman breaks into that room and demands that the man returns every stolen art piece, including the mermaid painting, but the elder man is clearly delusional and he explains how this is the only way he could stay close to that woman, who was an opera singer he met years ago and refused his love.

The elder millionaire arms himself with a crossbow and attacks Batman, forcing the Dark Knight to chase him across the castle. The elder man uses his knowledge of the place and Batman falls for deadly traps, but he manages to break out using his wits, gadgets and athletic nature. When Batman has finally cornered the elder millionaire, the man starts having a vision of his beloved Caterine and he folows her ghostly figure until he falls from an upper balcony of the castle. Batman swings through a lower window using his Batrope and saves the madman from a certain death, putting an end to his days of lunacy and art larceny.

Afterwards, Bruce is back in his penthouse and he is watching the TV as the news report that the elder millionaire has been placed in a mental hospital. At that moment, Mrs. Cathy turns the TV off again and Bruce finally realizes that she has aversion towards that man. Taking a guess, Bruce asks her if she was an opera singer in her youth and she replies that she was in fact, but that she retired after an obsessed man chased her across the country and forced her to go incognito. In the end, Mrs. Cathy asks Bruce to keep the secret and Bruce assures him that he knows how to keep a secret.


Appearing in "The Hollow Man"

Synopsis for "The Hollow Man"

Believing her computer-matched date is the Orchid Killer, Barbara Gordon follows after him as Batgirl, only to lose him and to get attacked by a man hiding out in a dark alley. At first she believes it's Max until she see's the persons face is that of a handsome man. This attacker knocks her out, and later Batgirl comes too to find Max who explains that he arrived and scared off her attacker. With this date a bust, she sets up a new one as Barbara Gordon. Her second date is with a man named John Milman who quickly freaks out and attacks her, but is stopped by the arrival of Jason Bard, however Bard's bad knee fails him again and Milman manages to get away.

Tracking Milman to his home as Batgirl, she breaks in and attacks a man packing a suit case there to discover that it's the man who attacked in her in the alley the night before. Gaining the upper hand the easily defeats him and finds that he was both Max and Milman, and would disguise himself with masks. When she asks him why he committed the murders he explains it was because women never saw his inner beauty only falling for his good looks and it eventually drove him mad. After listening to his reason, a disgusted Batgirl turns him over to police.

Retrieved from "https://dc.fandom.com/wiki/Detective_Comics_Vol_1_397?oldid=2265077"
Community content is available under CC-BY-SA unless otherwise noted.