"The Master Plan of Doctor Phosphorus!": As a lone criminal attempts a robbery in the middle of the night, he is caught by Batman, who makes short work of the crook. As Batman rounds up the criminal, he is informed by a court courier of a subpoena issued for him, righ

"The Master Plan of Doctor Phosphorus!"

The Master Plan of Doctor Phosphorus!

This is my city, Royal--the best in the country, and maybe in the world, in spite of the rats that live here! I've sworn to keep it clean of rats! That's my right!


Appearing in "The Master Plan of Doctor Phosphorus!"

Synopsis for "The Master Plan of Doctor Phosphorus!"

As a lone criminal attempts a robbery in the middle of the night, he is caught by Batman, who makes short work of the crook. As Batman rounds up the criminal, he is informed by a court courier of a subpoena issued for him, right as the police arrives to take away the criminal.

After learning the strange news, Batman decides to go to the Gotham General Hospital to check on his trusted friend and servant, Alfred. However, Batman didn't expect to find Commissioner Gordon sharing room with Alfred and so they have to pretend to keep the facade in front of Gordon. Both Gordon and Alfred are being treated for the poisoning caused by Dr. Phosphorus. Taking his chances, Batman asks Gordon about the subpoena, but he has no idea and deduces that it must be doing of City Council's chairman, Rupert Thorne. At that moment, Dr. Bell enters the room and noticing Batman's injuries from a past encounter, he wants to remove Batman's cowl to give him proper treatment. However, Batman recalls that Bell is part of the city council and he confronts Bell about the subpoena. Bell reveals that he requested Batman to be summoned and he expects that the authorities of Gotham City soon declare Batman an outlaw and a wanted man. Batman decides to leave the hospital without giving a word of farewell.

At that moment, Dr. Phosphorus strikes again at the Sprang Memorial Arena during a rock concert and affecting hundreds of people in the audience.

O'Hara warns Batman
With help from Alfred and Dick, they moved most of the equipment and the most important trophies from the original Batcave to the new space and Batman finally has a place to continue his detective work. While on the Batcave II, Batman realizes that he is contaminated with radiation, which he deduces was caused by his confrontation with Dr. Phosphorus. At that moment, he gets a call from Chief O'Hara, who informs him about Phosphorus latest attack and warns him that the city council has pulled strings against him and Batman is now officially a wanted man by the police. Without giving much thought to the meaning of such development, Batman asks O'Hara about an important source of radiation near Gotham and the answer is promptly given.

Moments later, Batman goes to the offshore nuclear power plant, which was financed by Rupert Thorne, to investigate, but he is unable to enter as the guards outnumber him. Batman retreats in the Batboat, but he soon comes up with another plan. 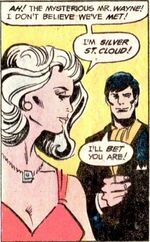 As Bruce Wayne, he organizes a party in one of his private yatchs and he has invited several members of Gotham's elite. Among them is Rupert Thorne, but Bruce is also introduced to the lovely Silver St. Cloud, a young woman with silver hair who is seriously interested in Bruce, a feeling he reciprocates. However, the party is just part of the plan to distract some important people, giving Bruce enough time to change into Batman and go to investigate the nuclear plant.

Batman sneaks into the plant and avoids being detected by the guards, who are clearly people working for Thorne. Batman finds the nuclear reactor and he soon notices the presence of Dr. Phosphorus, who has been hiding in the reactor room. Batman and Phosphorus fight once again, but this time Batman has come prepared with a special Batsuit that protects him against radiation. Without the advantage of his burning touch, Phosphorus is outmatched and during the struggle, he falls to the reactor, causing an unstable reaction and a fiery explosion. Batman is barely able to come out of the explosion alive and he assumes that Phosphorus has met his demise.

Bruce returns to his yatch before the party ends and he is present when the harbor police go past his yatch towards the power plant, which is glowing with radiation. Due to his sudden reappearance, Bruce is warmly greeted by Silver, who missed him during the entire party, but he promises to make it up to her by spending more time together. Silver however, notices that Bruce's hair is damp and she becomes suspicious of Gotham's Bachelor and his activities.

Retrieved from "https://dc.fandom.com/wiki/Detective_Comics_Vol_1_470?oldid=2689914"
Community content is available under CC-BY-SA unless otherwise noted.