"I Am the Batman!": <div style="width:150px;float:right;clear:none;margin-right:10px;margin-left:10px;margin-top:5px;margin-bottom:5px;border:1px solid

To learn The Batman's secrets-- you must triumph over him-- not me! I was a fool to ever think of selling them! The Batman is too good for such as you-- Thorne!


Appearing in "I Am the Batman!" 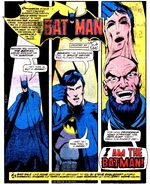 After learning the secret identity of Batman, Professor Hugo Strange has taken control of the Wayne Foundation, posing as Bruce Wayne and he also uses the Batsuit for his own amusement. Strange has captured Afred and has taken him to the Graytowers building, where Alfred is locked in the same cell as Bruce, who is kept alive, but drugged to prevent complications.

Retrieved from "https://dc.fandom.com/wiki/Detective_Comics_Vol_1_472?oldid=1830359"
Community content is available under CC-BY-SA unless otherwise noted.