"Batman: Year Two - Chapter Four: "...So Shall Ye Reap..."": The plan to eliminate The Reaper failed and the Gotham Organized Crime is none too pleased with Joe Chill, who was responsible of carrying out the mission along with [[B

It's getting dark... and I can always find my way in the dark...

The plan to eliminate The Reaper failed and the Gotham Organized Crime is none too pleased with Joe Chill, who was responsible of carrying out the mission along with Batman. However, Chill promises to eliminate them both next time and the thugs arrange a second meeting on the night of the upcoming Friday. Unaware to them, The Reaper listened to their entire conversation and he soon told the information about the meeting to a police informant so that the criminals are captured.

Elsewhere, Bruce Wayne goes on a date with Rachel Caspian, much to Alfred and Leslie's joy. During the date, Bruce proposes to Rachel and she agrees to marry him.

The night of Friday, Commissioner Gordon has arranged a massive raid to the criminals' hideout after the information provided to them. Gordon and his men go into action, capturing several criminals and forcing more of them to attempt a desperate escape through the backdoor, where The Reaper is waiting for them. The leader of the criminals is killed by the Reaper and a massive confrontation starts between the GCPD, the Organized Crime and The Reaper. Batman arrives in the middle of the fight and uses one of the GCPD's vehicles to break into the place, putting an end to the fight. The entire building collapses and the police can only rescue a few criminals after the incident, most of which blame Batman for their downfall. Having learned that Batman was working on the good side of the law all along, Gordon summons Batman with the Bat-Signal to apologize for believeing he was part of the criminals.

However, Batman is busy as he gets ready to kill Joe Chill. Before doing that, he visits Rachel Caspian and tells her that after one last act, he will be forever hers. After this, Batman goes to Chill's place and waits until the crook recovers from the confrontation at the hideout. When he learns that all the mob bosses are gone and The Reaper is presummed dead, Chill decides to leave Gotham, but Batman has one last request. The Dark Knight takes Chill to Crime Alley, where he reveals his identity to him and gets ready to eliminate Chill with his own gun. However, Chill is shot by The Reaper before Batman could pull the trigger and after learning his secret identity, The Reaper challenges Batman to one final fight at the top of the construction site of the Wayne Foundation.

Batman meets The Reaper and this time, he gets the upper hand in the fight using his own weapons against him and easily defeating the villain. The Reaper stumbles and almost falls off the edge of the building, but gets a hold of a loose girder. With his mask removed, The Reaper's identity is revealed as Judson Caspian and Batman tries to help the man. Caspian realizes Batman has no problem using guns and he tells him that The Reaper is no longer needed as Batman will make a fine replacement. With these last words, Judson breaks loose from the girder and falls from the top of the building to his death. 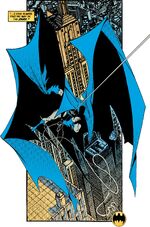 Batman in the Dark

In the aftermath, Batman takes Joe Chill's gun and buries it under the base of the Wayne Foundation building, never to touch it again. Moments later, Bruce Wayne goes to Rachel's place, where the press has created a massive crowd after learning that Judson Pierce was The Reaper. Bruce gets in the house and talks to Rachel, who is devastated after learning the news. In order to atone for the sins of her father, Rachel decides to become a nun as she had first planned, officially ending her engagement with Bruce.

Later, Bruce takes Leslie to the new building he constructed for her. The Thomas Wayne Memorial Clinic is the place where Bruce hopes Leslie will continue her work, helping those in need while he will also continue his crusade against evil in the dark.

Retrieved from "https://dc.fandom.com/wiki/Detective_Comics_Vol_1_578?oldid=2585183"
Community content is available under CC-BY-SA unless otherwise noted.