"The Fear - Part One": A cold winter night in Gotham City, Batman is on patrol, preying upon those who terrorize the innocent and weak. Eventually, the Dark Knight finds a group of thugs mugging a man and he goes into action, beating the criminals to a pulp. Not f

The Fear - Part One

One of the great mysteries of the criminal brain-- is why creeps like you-- don't take scenes like this into consideration-- before you set out on your dirty work! Then again, I guess it keeps me employed!


Appearing in "The Fear - Part One"

Synopsis for "The Fear - Part One"

A cold winter night in Gotham City, Batman is on patrol, preying upon those who terrorize the innocent and weak. Eventually, the Dark Knight finds a group of thugs mugging a man and he goes into action, beating the criminals to a pulp. Not far from that scene, a lone figure walks on the sidewalks carrying a shoppping cart with a suspicious looking bulk inside. The person walks towards the front of a building where a woman and her kid are taking their belongings into a truck with help from a taxi driver. While the woman and the driver go into the house to take out more furniture, the kid remains outside and he witnesses how the mysterious person approaches the open trunk of the taxi and dumps the bulk inside. When the person notices he is being watched by the kid, the man reveals his face and the kid is shocked to be waved at by Jesus.

Having dealt with the muggers, Batman talks to the victim who has not been harmed and after making sure the man is safe, a shriek gets Batman's attention. Batman goes to the source of the scream and finds the woman, her kid and the taxi driver beholding the corpse of a man inside the taxi's truck. Batman interrogates them, but the only one who can give answers is the kid, whose tale doesn't make much sense. Batman calls the Gotham City Police Department and the authorities soon arrive to take away the body. In the process, Batman learns the identity of the victim and the fact that he was last seen with a man who looked like Abraham Lincoln. 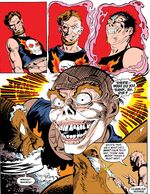 Madness and Fear
Moments later, Batman goes to the Morgue, where the coroner informs him that the victim's heart was ripped out from his body. After a chemical examination of the victim's dry blood, they find that the fear levels on his system were high and that the man was terrified before his death.

Elsewhere, an Abe Lincoln look-alike approaches a homeless man and lures him into a trap to kidnap him and drag him to a derelict building, where he straps him to a wall before he starts a slow torture to terrorize the man. It is then that the madman reveals his true, hideous looking face, causing the homeless man to faint. The madman then proceeds to "absorb" his victim's fear from his body, by sucking the fluids coming out of every pore.

At that moment, Batman uses his Batmobile computer to find all possible suspects that have been recently released from prison and Arkham Asylum. With five names, Batman first pays a visit to Ronald Dillon, who has been commiting robberies, but nothing about murders. After capturing Dillon, Batman continues his search and the next name of the list is one Cornelius Stirk, recently released from Arkham. Without a known address, Batman goes to the only connection Stirk has: Dr. Rolf Anton.

Upon arriving at the doctor's home, Batman finds the man's corpse hanging upside down from the ceiling of his home and his heart has been ripped out in a similar fashion to the previous victim. Batman knows Stirk is the murderer and looking at the doctor's files, he learns that Stirk was locked in Arkham at the young age of 16 for trying to murder a classmate and after years of medication, Stirk has been recently released, deemed as "having no signs of dementia". The files provide Batman with a possible address and he makes his way to the place, hoping that Stirk has not claimed another victim.

Retrieved from "https://dc.fandom.com/wiki/Detective_Comics_Vol_1_592?oldid=2547464"
Community content is available under CC-BY-SA unless otherwise noted.