"The Mud Pack - Part Three: Killer Clay!": Batman had just knocked Clayface III and he was about to turn off his power source when he was startled by the sudden appearance of Robin. Batm

Just look at him-- reliving every nightmare experience he's ever had... his much vaunted willpower being shredded by every fear-- every failure he ever knew!

Batman had just knocked Clayface III and he was about to turn off his power source when he was startled by the sudden appearance of Robin. Batman knows the kid could not possibly be alive, but the shock is still great, enough to give Lady Clay posing as Robin a chance to attack Batman. Although her efforts are good, Batman is still superior in combat and he defeats the shape-shifter turned boy wonder. However, the encounter has caused Batman to relive painful memories from Jason's death and in the time he is reminiscing, Clayface III recovers and attacks Batman, who is knocked unconscious with a single blow. Furious at the Dark Knight, Clayface III gets ready to eliminate Batman.

At that moment, Basil Karlo tries to buy some medication at the drugstore and when they refused to give him the prescription without the documentation, he kills the doctor and steals the drugs. Meanwhile, Lady Clay recovers in time to watch Clayface III about to kill Batman and she uses her abilities to stop the madman, knocking him unconscious. She then transforms into a giant eagle and takes both Clayface III and Batman back to their hideout. When the news about the confrontation reach Commissioner Gordon, he instructs the Gotham City Police Department to release a statement about Batman's innocence, hoping to clear his name in case his friend never returns.

When Lady Clay arrives to their hideout, carrying her victims, Karlo is already waiting for her. The two of them take Clayface III and they let him recover on a table while then they proceed to tie Batman to a chair in front of the projection screen. Turning into Looker once again, Lady Clay uses Looker's telepathic powers to scramble Batman's mind, making his fears and defeats more vibrant in his head. Batman recovers his consciousness and he learns that his deductions about the gang leader were right, but none of that matters as he is forced to watch Karlo's old movies, which in turn trigger his worst memories.

As this happens, Looker has reached Gotham City, looking for Batman and as she is unable to locate him, she goes to the GCPD Headquarters, where she learns from Commissioner Gordon about the recent encounter between Batman and the many Clayfaces. Going back to the place of the first encounter, Looker finds a bit of clay left behind and using her psychometric abilities, she locates the Mud Pack's hideout.

Meanwhile, Batman's mind goes on a downward spiral as he is overcome by all of his fears and failures. The murder of his parents, the crippling of Barbara, the death of Jason and all his defeats at the hands of his enemies come to him, reducing his mind to nothing. With their enemy defeated, Basil Karlo proposes a celebration between him and Lady Clay, who naively accepts a cup of champagne from Karlo, unaware that the former actor had dosed the cup with a strong medication that would knock her unconscious for a while. With Lady Clay knocked out, Karlo proceeds to take samples of her blood as well as that of Payne in order to achieve his ultimate plan of absorbing all their powers in his own body. 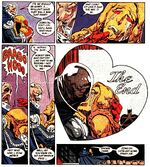 After Karlo has left with their blood, Clayface III recovers and attacks Lady Clay, who is still weak. The woman doesn't fight back and accepts Payne's anger as punishment for trusting Karlo blindly as a result of her loneliness. Payne's rage disappears and instead, he becomes sympathetic towards her, even showing attraction for her as well. Payne's honest words reach Lady Clay's soft heart and she breaks down in his arms, as the two of them embrace in a romantic kiss, worthy of a classic romance movie. The loving couple decide to leave Batman behind and they go away together as the Dark Knight's mind sinks deep into the dark abyss of his own consciousness. Just a few minutes later, Looker arrives at the secret hideout and finds the place empty except for a totally broken Batman, with a blank stare and drooling out of control.