"The Mud Pack, Part Four: The China Clay Syndrome": Dawn has come to Gotham and Lady Clay flies away from the city carrying her new love, Clayface III, both of them seeking a better future and on

Part of the "Batman: The Mud Pack" storyline.

A sudden hush descends! The audience draws in its breath! The villains of the piece are down-- the hero stands triumphant! Only one question remains-- does he nobly spare their worthless lives... or do they die?

Dawn has come to Gotham and Lady Clay flies away from the city carrying her new love, Clayface III, both of them seeking a better future and only wanting to leave the former chaos behind. At the same time, Looker contemplates the dawn to give herself strength for the task she is about to perform. Batman is still under the influence of the mental intrusion caused by Lady Clay under the instructions of Basil Karlo and Looker is the only one who can help the Dark Knight, but in order to do so, she must enter his disturbed mind.

Looker uses her powers to breach into Batman's mind, where she notices how the fears and challenges faced by the Caped Crusader haunt him relentlessly. As the demons of Batman's mind are instructed to attack only the Dark Knight, Looker can easily destroy them with her powers and when Batman is no longer under attack, she releases his constricted mind. Once released, a grateful Batman inquires Looker about the current whereabouts of the Clayfaces, but she has no clue about it. She tries to use her psychometric abilities on the pile of mud that remains of Matt Hagen, but the information is not clear. After recovering from his ordeal, Batman uses his detective equipment to investigate the place and analyze every little detail. After gathering enough information, Batman deduces the events that went down between the Clayfaces and comes to the right conclusion that Basil Karlo double-crossed the others and stole blood samples from their bodies in order to use them and become a real Clayface himself. Knowing that Karlo might require assistance, Batman and Looker split as they go looking for Karlo at S.T.A.R. Labs and the Gotham General Hospital.

At that precise moment, Karlo breaks into the blood laboratory research department at Gotham General and forces Doctor Lowell to blend the two blood samples and later inject them into his body. The doctor first analyzes the samples and is utterly shocked to learn the nature of the blood, but despite his warning and best judgment, Karlo continues with the process. 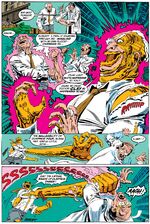 Looker arrives at S.T.A.R. Labs, but she realizes that Karlo is not at the place. She starts flying back to Gotham General, but she is exhausted and can no longer fly as a result of the strain from the previous activities. In order to give her powers time to recover, Looker asks for a taxi ride to the hospital. Meanwhile, Batman inquires at the hospital's reception about any person at the blood lab, but he is told that Doctor Lowell is alone. Batman thinks that maybe Karlo is at S.T.A.R. Labs, but when he notices two shadows on the blood lab's window, he knows the truth.

When the blood samples have been merged, Karlo forces the doctor to inject the blood in his body and as soon as the transfusion is complete, his body begins to change, adopting the shape of clay. Testing his new abilities, Karlo stretches his arms with the malleability of Lady Clay and kills the doctor with the lethal touch of Clayface III. It is then that Batman breaks through the window and confronts Karlo, who now calls himself the Ultimate Clayface. Batman tells him to stop the madness, but Clayface replies that he is not mad and that he is not a "misunderstood monster" as the Hollywood horrors he used to play, but he is conscious and willing to destroy anything that crosses his path.

Batman's efforts are futile against the powers of the Ultimate Clayface, but nonetheless, he tries to fight back. At that moment, Looker finally arrives at the hospital and starts climbing the Batrope towards the blood laboratory. Batman uses an emergency flare to buy himself some time by blinding Clayface. However, the powerful shape-shifter recovers faster than Batman expected and the Dark Knight finds himself in the grip of the monster once again. Looker arrives in time to save Batman from a gruesome death, but her powers are not fully recovered yet, and she is knocked aside by Clayface with no real effort. Batman tries to help her, but he is also knocked aside, as none of them are a match to the Ultimate Clayface. 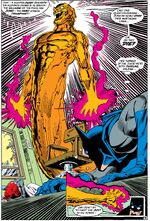 Karlo finally decides it's time to eliminate his enemies and he prepares his lethal touch to melt them both. Batman tries something desperate and tells Looker to overload Clayface's mind and body using her powers. Looker uses all the energy she's got left and the attack works. Clayface loses control of his powers and his whole body starts burning with the lethal, corrosive touch. Batman attacks Clayface with a chair and pushes the monster out through the window into the street below, where a couple of police officers witness Clayface's fall on the sidewalk and they also watch as Clayface burns through the ground and falls endlessly towards the Earth's core.

When Looker asks Batman if Clayface's fall would stop, he jokingly tells her that they should probably warn the authorities in China. Noticing a lighter mood from Batman, Looker reflects how this case reminded her of the Outsiders and asks if there is any chance of them becoming partners in crime-fighting once again, but Batman refuses, telling her that he works better alone. Looker was already expecting that answer as she had been inside Batman's mind and she learned how the man thinks, but she thought it was worth a try.

In the aftermath, Lady Clay and Clayface III enjoy the dawn on the top of the mountains in the outskirts of Gotham, not worrying about Karlo, Batman, or Gotham City. And so, two misunderstood monsters have found solace in each other's love and are not willing to sacrifice this for anything in the world.