""No Rest for the Wicked"": Batman drags Mayor Krol through the flooded Gotham River Tunnel, hoping they can survive. He dives underwater and discovers a possible exit through the tunnel walkway, 30 feet below the surface. Krol is exhausted

"No Rest for the Wicked"

"No Rest for the Wicked"

You're supposed to be such a hotshot. Bane believes you are, anyway. I used to, too. Now I think you're all bluff, masked man.


Appearing in "No Rest for the Wicked"

Synopsis for "No Rest for the Wicked"

Batman drags Mayor Krol through the flooded Gotham River Tunnel, hoping they can survive. He dives underwater and discovers a possible exit through the tunnel walkway, 30 feet below the surface. Krol is exhausted and afraid, so Batman knocks him unconscious and wraps his cape around him to keep the water out of his airways. He carries Krol underwater, holding his breath until he comes to an exit. Unfortunately the hatch is rusted shut, and only his anger at Bane's manipulations gives him the extra burst of strength he needs to open the hatch before drowning.

On the shores of Gotham River, Commissioner Gordon and the GCPD wait for any sign that the mayor survived the flood. Renée Montoya spots the mayor wandering in tears on the beach. When asked how he survived, the mayor describes the Batman's unwillingness to give up or surrender in bewildered awe.

Meanwhile, Ventriloquist breaks into a police evidence room, kills the guard on duty, and steals back Scarface, his boss.

Batman rests on a roof, exhausted. Suddenly, he is startled by a falcon's cry. Remembering that Robin had mentioned that one of Bane's men is a falconer, Batman becomes wary that he may be being watched. Suddenly, he is attacked by Trogg. Finding himself too weak to break out of Trogg's iron grip, Batman releases a capsule of nauseating gas into his assailant's face, and knocks him to the ground below. He recalls that Bane has three henchmen, and wonders if he's being made to run a gauntlet. 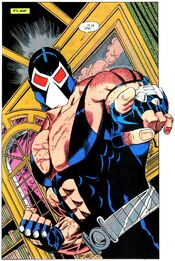 Bane confronts Bruce Wayne
Unfortunately, he has little time to think, because he is attacked seconds later by Zombie. Zombie uses throwing knifes to disorient and threaten the Bat, warning that he fights with his mind, rather than brute strength. Taking that in mind, Batman tricks Zombie by throwing his cape and cowl at his opponent, and then knocking his legs out from under him from behind.

Moments later, Talon the falcon swoops down and attacks. The bird herds Batman to his next enemy - Bird. Batman's exhaustion makes him clumsy and less able to defend against Bird's attacks. However, when Bird begins taunting him, claiming that he no longer believes - as Bane does - that Batman runs Gotham City, the Dark Knight finds new energy, and batters Bird into giving up Bane's location. Unfortunately, Bird simply falls unconscious. Batman drives home to the Batcave, puts on his robe, and trudges upstairs to Wayne Manor. However, upon entering the manor, he discovers Alfred's unconscious body on the floor, and Bane waiting for him.

Retrieved from "https://dc.fandom.com/wiki/Detective_Comics_Vol_1_663?oldid=2775430"
Community content is available under CC-BY-SA unless otherwise noted.