"Who Rules the Night"

"Who Rules the Night"

Batman is no more. I have destroyed him. I rule these streets! I rule Gotham.


Appearing in "Who Rules the Night"

Synopsis for "Who Rules the Night" 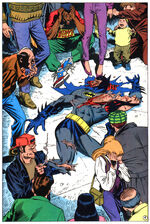 The Broken Bat
Bane has broken the Batman, and displays his triumph on the streets of Gotham City, holding his enemy's limp body high over his head. In further show of his superiority, Bane tosses Batman's body from the top of a building, and it lands in a crumpled heap on the sidewalk. Officer Marz and Renée Montoya call an ambulance and do crowd control, ascertaining that Batman is still alive. When the ambulance arrives, Alfred Pennyworth, disguised as an EMT, to ensure that he is taken back to the Batcave. He assures Montoya that Batman is in good hands.

When Alfred realizes that Batman's back has been broken, Robin argues that he should be taken to a hospital. Alfred refuses, explaining that by bringing him to a hospital, it would expose Bruce Wayne as the Batman, and destroy his identity. Instead, they take him back to the cave and hope to stabilize him enough until they can come up with a reasonable explanation as to why Bruce Wayne would have these injuries.

Back on the scene, Commissioner Gordon realizes that Batman never arrived at the hospital, becoming angry with Montoya. However, when Harvey Bullock suggests that it might have been some of Batman's own people who took him, the Commissioner's mood changes.

In their hideout, the Joker bemoans the fact that a mere rookie managed to take down the Batman, after he and the most dangerous of Batman's Rogues Gallery have tried since the Arkham breakout. Similarly, Scarecrow is annoyed that they wasted their time on kidnapping the Mayor, and failed to gain control over Gotham or the ransom he needed to continue his experiments. Scarecrow becomes frustrated with Joker's mockery, and sprays him with fear gas. Of course, the gas has no effect, given the Joker's natural immunity to toxins. In retaliation for simply trying, the Joker savagely beats Scarecrow into unconsciousness with a chair.

In the Batcave, Alfred manages to get Bruce stable, though he is still comatose and feverish. Unfortunately, Afred lacks the required medications to treat spinal trauma - and it is needed within the next hour to be effective. Robin and Azrael get into the Batmobile and speed off in search of the drug Decadron, which is required lest Batman be paralyzed for life.

Sarah Essen-Gordon finds her husband atop Gotham City Police Headquarters, waiting by the Bat-Signal. She puts aside her dislike of Batman in order to comfort him, as he wonders if his friend is alright. He promises to be down in a minute, still hoping for a sign from Batman's partners.

In a seedy Gotham hotel, the Ventriloquist watches as his two puppets, Socko and Scarface, become increasingly negative toward one another. Eventually, the two dummies point guns at each other, and the Ventriloquist shoots himself in both hands.

Robin appears in Commissioner Gordon's office, and begs for help in getting the Decadron needed for Batman's recovery. The Commissioner dispatches Bullock and Montoya to drive as fast as possible to a trauma centre, pick up the drugs, and deliver it to a deserted cul-de-sac. When they arrive at the dead end, Robin and Azrael snatch away the package, and rush back to Alfred.

With the Decadron administered, all the heroes can do is wait...

Retrieved from "https://dc.fandom.com/wiki/Detective_Comics_Vol_1_664?oldid=2743554"
Community content is available under CC-BY-SA unless otherwise noted.