"Flesh and Steel": An enraged Nightwing goes after Jean-Paul after the Batmobile exploded with Bruce inside. Robin meanwhile saves a child from a car that is about to ex

Behind all that steel and all those dawn gadgets...you're just a common thug! You want to be Batman, huh? Yeah, right. You'd have to stand on top of Gotham Tower just to reach his boots!


Appearing in "Flesh and Steel"

Synopsis for "Flesh and Steel"

An enraged Nightwing goes after Jean-Paul after the Batmobile exploded with Bruce inside. Robin meanwhile saves a child from a car that is about to explode. Nightwing and Jean-Paul's combat is too intense and they fall off of the bridge into the water.

At that moment, Robin is shocked to see Bruce unharmed. He explains that he managed to escape seconds before the explosion after he deduced that the car would've been rigged. Bruce tells Robin to follow him away from the scene, knowing that Nightwing can hold his own and would know when to back off with Jean-Paul.

After they are gone, Harvey Bullock and Renee Montoya arrive at the scene and they learn of the chaos caused by the fight. It is then that Bullock deduces that the masked vigilantes are fighting to get control over Gotham. 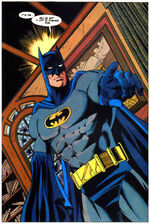 There is only One Batman!

Meanwhile, the fight between Nightwing and Jean-Paul leads them to a riverboat casino. Once inside, they wreck the place with their best efforts to defeat each other. Jean-Paul tells Nightwing that he will kill him and then Robin so there will be no more "pretenders". Thanks to his metallic armor and the system, Jean-Paul defeats Nightwing and would've killed him, have the Gotham City Police Department not arrived in time to save him. Jean-Paul throws Nightwing's defeated body into the cops' path, escaping in the process.

Jean-Paul finds his way to the subway tunnels back to the Batcave, praising St. Dumas all the way. He feels confident that he is the conqueror of Gotham and the rightful owner of the mantle of the Bat. When he hears someone above in Wayne Manor, Jean-Paul assumes that it is Robin, the last challenger, but when he goes up to face the intruder, he is confronted by Bruce Wayne, the real Batman, who has come to remove Jean-Paul from the role of the Dark Knight.

Retrieved from "https://dc.fandom.com/wiki/Detective_Comics_Vol_1_677?oldid=2458859"
Community content is available under CC-BY-SA unless otherwise noted.