Batman: "War Crimes, Part 1: To the Victor Go the Spoils"

Batman: "War Crimes, Part 1: To the Victor Go the Spoils"

Killer Croc: "The Beast Beneath, Part 2: Croc's Tale of Tears"

We demand justice for the fallen. So I'm calling for everyone who lost someone in the gang war -- be they innocent bystander, police officer, or yes, gangbanger, mobster, or costumed criminal -- to come down to Cathedral Square tomorrow and create a memorial. Give voice to those silenced by injustice.


Appearing in Batman: "War Crimes, Part 1: To the Victor Go the Spoils"

Synopsis for Batman: "War Crimes, Part 1: To the Victor Go the Spoils"

Batman interrogates Alex Kosov
Down on the tracks of the subway train of Gotham City, Batman is questioning the leader of the Odessa Mob, Alexandra Kosov about Black Mask's next movement, but she refuses to tell Batman anything. Batman ties her hands and feet together on her back and hangs her from the ceiling of the tunnel. As the subway train comes towards her, Alexandra panicks and gives Batman a full confession of Black Mask's activities. Batman saves her before the train crushes her and he removes her glass eye as a punishment for all the evil deeds that her gang committed during the gang war. Batman leaves Alexandra in the darkness and warns her to keep insects out of the empty eye socket.

Reporter Arturo Rodriguez stars on his own TV show, where he exposes some of the most relevant crime cases in Gotham and this time he has brought a guest to his show, a man called Aaron Black that wants to address the outcome of the gang war that destroyed Gotham. Black starts explaining that the criminals and the vigilantes are not the only ones to blame for the situation but the Gotham City Police Department is also guilty of letting things get out of control. Black also talks about the death of Stephanie Brown, as he has researched a lot about the case. He explains that Brown was the vigilante known as Spoiler and that she was also the latest Robin and he blames Batman for allowing kids to undertake his crusade and cost their lives in the meantime. However, he explains that the death of Stephanie happened under mysterious circumstances and that she might still be alive if not for all the events that evolved during the gang war. Aaron Black asks the people of Gotham to gather together on a memorial for all the people fallen during the gang war.

That night, Bruce keeps a close eye on the meeting that Black Mask was supposed to go, but the criminal never showed up. Back in the Batcave, Bruce examines the information on the Batcomputer when Alfred delivers Bruce a videotape sent to him. The tape was a recording of the earlier show where Arturo Rodriguez talked to Aaron Black. Bruce recalled all the past events until the death of Stephanie and after watching the whole video, he decides to go out and investigate who iss the responsible for leaking information about Stephanie's death and for sending him the tape, as it is obvious that it must be someone who knows that he is Bruce and Batman.

Batman goes to see Leslie Thompkins at the East Side Clinic, but upon arriving he learns that Leslie quit the clinic and went away a couple of days earlier. After talking to a nurse, Batman learns that Leslie and her personal assistant Vera, shared some sort of secret about Stephanie's death. Batman also learns that the files from Stephanie Brown have been retrieved by Leslie's assistant and soon he goes to see her.

Batman arrives at her place and when he enters her room, he finds her dead body, crucified to the wall and written in blood the word "Snitch". Batman notices that the folder with the confidential information about Stephanie was in the bed but a quick glimpse makes him realize that the last pages are missing. Batman leaves the place and goes to Leslie's home, which is utterly empty and Batman doesn't quite understand why would Leslie leave in that manner, as if escaping from something or someone. 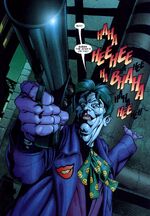 Joker strikes again
Batman returns to the crime scene and takes a closer look after which, he realizes that Leslie's assistant was stabbed in the wrists, ankles and chest with some of his own Batarangs and after removing them and cleaning the message written in blood, Batman puts the body back in the wall but this time he places knives instead of his discarded Batarangs. Someone is trying to frame him and Batman believes that it must be Black Mask.

The next morning, Bruce Wayne goes to the memorial organized by Aaron Black and after the whole day of looking closer to the man, Batman thinks he knows who Aaron Black really is. As Black leaves the gathering, Batman approaches him and tells him to stop pretending as he already knows the truth. From behind of Batman a voice tells him that he also knows who "Batman" really is. The person posing as Batman turns around and discovers that Joker is aiming a gun at him and laughing maniacally.


Appearing in Killer Croc: "The Beast Beneath, Part 2: Croc's Tale of Tears"

Synopsis for Killer Croc: "The Beast Beneath, Part 2: Croc's Tale of Tears"

Killer Croc goes to the home of Maria Belleza, the doctor who cured him once from the Hush virus and reverted his mutation. Croc is mutating again and finds harder to control himself as he used to do in the past. He almost strangles the doctor to get her to cure him, but she told him to let her go so she can work on his cure.

As Maria injects Croc with a special serum on his tongue and Croc finds it really hard keeping control and not biting her hand off, but in the end he manages to succeed.

As Maria starts working on the cure, she asks Croc about his life and his illness. Croc tells her that he was born with that condition, killing his own mother at birth. After this, he was sent to Florida with an aunt that didn't care for him but for the money that the government gave her for taking him. Childhood was hard as every kid mocked Croc and feared him as they grew up. Croc became an outlaw and spent some time in prison and after going out he became an alligator fighter, but it didn't last long. He decided to move to Gotham and try to conquer the underworld, but his plans were thwarted time and again by Batman and all his allies. Croc recalls that the mutation was constantly happening to his body, but that he would never lose control over his actions, until Hush injected him with his virus and the mutation worsened, which is causing him troubles controlling his animal instincts.

Maria tells Croc to get some sleep as she works on the cure and after a few hours, she thinks that she has found the cure.

Retrieved from "https://dc.fandom.com/wiki/Detective_Comics_Vol_1_809?oldid=2618164"
Community content is available under CC-BY-SA unless otherwise noted.