"Batman: "War Crimes, Part 3: A Consequence of Truth"": After the memorial arranged by Aaron Black, Black Mask started planning his next move.

Killer Croc: "The Beast Beneath: Croc's Tale of Tears, Part 3"

...it doesn't matter. No more blaming. She's gone, Batman. And... knowing how or why isn't going to change that. Nothing will. Live with that. I have to.

Appearing in Batman: "War Crimes, Part 3: A Consequence of Truth"

Synopsis for Batman: "War Crimes, Part 3: A Consequence of Truth"

After the memorial arranged by Aaron Black, Black Mask started planning his next move.

In the meantime, Batman pays his respects to Stephanie Brown at the memorial, at the sight of hundreds of people. Batman then leaves the place and contacts Alfred to learn more about the thugs conversations at Carlo's. Alfred informs that the thugs had no clue about Leslie Thompkins or Joker's whereabouts, but they seemed to be informed about Aaron Black and Black Mask's latest activities. The information led Batman to Winona Chen, the main anchor woman from the channel 7, the main competition of Arturo Rodriguez and channel 8. Batman spots Chen as she walks to the rooftop of channel 7 building along with three bodyguards and he uses a smoke batarang to eliminate the men protecting her. Batman then grabs Chen and takes her to a different rooftop where they can talk without restrictions. Chen is afraid that Batman might kill her, but Batman explains that Black Mask is the one who has been posing as him and killing people. He also tells her that he only wants to know how to find Aaron Black, but before revealing that information, Chen wants something from him in exchange.

Aaron Black is sitting alone in his apartment, watching a picture of his family during one of her daughter's birthdays and he sheds a tear of sorrow. Batman arrives and finally uncovers Aaron Black as Arthur Brown, a.k.a. The Cluemaster, who was returned to Gotham after his deadly accident on a mission of the Suicide Squad. Brown reveals that he barely made it out alive from the accident and that while recovering, all he could think of was his daughter, Stephanie. As soon as he recovered, he returned to Gotham to see her and he find that she was killed during the gang war. Batman wants Brown's help finding Stephanie's missing medical records, but Brown reveals that his ex-wife, Crystal is going to make a big reveal soon.

Just then, Arturo Rodriguez starts broadcasting his show, "Taking Sides with Arturo", in which he has Crystal Brown for a special interview. However, Arturo tries to force unwanted answers about Stephanie's death from Crystal and shortly after, "Batman" appears on set and attacks Arturo and Crystal. He starts telling them that Stephanie was worthless and that her death was well deserved. Both of them try to attack "Batman", but he overpowers them both until someone grabs Arturo from behind and tosses him away from "Batman". The person that tossed Arturo was in fact the real Batman and he ripped off the mask from the fake Batman, revealing once again to be Black Mask. Batman tells Black Mask to give up the medical records he stole, but the crime lord instead burns the corner of the folder before being stopped by Batman. Black Mask then runs away from the building and Batman tries to follow him, without success. 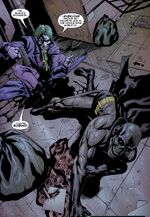 Upon returning to the set, Batman watches as Crystal Brown rips the medical records to pieces and she explains that it doesn't matter how did her daughter died, but the fact that she is dead is all that matters to her.

Later, Batman keeps searching for Black Mask unaware that he was taken by Joker, who is holding the crime lord and pointing a gun at him. Black Mask hits the Joker and takes the weapon from him and tries to turn the situation around. However, the gun he took was a toy gun that shoots a "bang" flag and as he failed on his attempt, Joker pulls out a real gun and shoots Black Mask on the leg. As Black Mask crawls on the ground, Joker explains that he has been chashing Black Mask all along since he took the job he likes more than anything in the world: killing Robin.


Appearing in Killer Croc: "The Beast Beneath: Croc's Tale of Tears, Part 3"

Synopsis for Killer Croc: "The Beast Beneath: Croc's Tale of Tears, Part 3"

Killer Croc is still at the place of Doctor Maria Belleza, while she works on the cure to reverse the mutation caused by the Hush virus. After several hours of intense work, Maria finally manages to develop a cure and injects the serum to Croc. A few minutes later, Killer Croc's body reverts to his human-like body and Maria tells him that despite the appearances, he is still a man that deserves love and respect. They approach each other and the situation gets romantical for a moment until Croc starts mutating again and his body returns to the lizard-like form.

Maria gets back to work on a cure, but the hours pass and she is not able to find the answer. Finally, she admits that she won't be able to find a cure as the virus mutates too quickly. Croc's basic instincts overcome his control and due to his hunger, he devours Maria, with hunger and regret at the same time.

Croc leaves the place less hungry and completely sorrowful. As he walks through the sewers, he is determined to make the people responsible for his condition, including Hush, Black Mask, Riddler and Batman, pay for all they've done to him.

Retrieved from "https://dc.fandom.com/wiki/Detective_Comics_Vol_1_810?oldid=2618178"
Community content is available under CC-BY-SA unless otherwise noted.