"City of Crime, Part 9: The Experiment": Crazy Jeffery has entered Raleigh Park and is roaming the place at night. Soon, he finds a piece of cheese on a trash can and picks it to make sure it's edible. A smiling man talks to him, the first time someone has talked to him in two years, and after t

"City of Crime, Part 9: The Experiment"

City of Crime, Part 9: The Experiment


Appearing in "City of Crime, Part 9: The Experiment"

Synopsis for "City of Crime, Part 9: The Experiment"

Crazy Jeffery has entered Raleigh Park and is roaming the place at night. Soon, he finds a piece of cheese on a trash can and picks it to make sure it's edible. A smiling man talks to him, the first time someone has talked to him in two years, and after telling him that the cheese is good to eat, they start laughing like maniacs.

The following day, Bruce keeps playing his role of Donnie Maloy to all the people of Crown Point and he enjoys spending time with the children of town. As he goes back to Raffi's place, he finds Siran, Raffi's wife, drinking a glass of wine and he asks her to stop before her husband returns. Bruce then asks her about the smiling man, who seems to be friends with Raffi, but the only thing she tells him is not to go near the park. Raffi arrives and takes his friend, Donnie for a walk in town.

Meanwhile at Gotham Mercy Hospital, Robin and James Gordon keep an eye on the Ventriloquist and Frank Ivers. Robin explains him about The Body and how they seem to be everywhere. Gordon has placed a couple of people outside the hospital room to guard from the outside and they notice when some strange people appear and stare at the room but walk away when they realize it is guarded. Ivers informs them that The Body can destroy the whole building if they want and Gordon deduces that they are holding any action because they want to act in Batman's presence.

At that moment, Bruce and Raffi walk the streets of Crown Point and Raffi takes Bruce to the construction site, where he gives Bruce a speech about how important they are in the grand scheme of building a legacy. In the meantime, Crazy Jefferey suddenly appears running across Crown Point with foam coming from his mouth and he approaches a group of kids on the streets. Most of them run away at the sight of the madman, but one kid named Eddie stays and Crazy Jefferey grabs him and screams for help. Eddie looks Jefferey directly in the eyes and soon, foam starts coming from Eddie's mouth as well.

When Bruce and Raffi return to their building, they see a body on the sidewalk. They enter the building and both of them start feeling a crippling fear in the atmosphere. When one of the building tenants attacks Raffi, the man loses it and goes upstairs to get ride of that person. Meanwhile, Bruce examines the nearest apartment and finds that the whole family has been killed. He walks inside, feeling terrorized of what he might find, but on the last room he finds Eddie, the kid who was infected by Crazy Jefferey. Eddie is one fo the kids with whom Bruce played early and he tries to reach out for him, but when Eddie looks at him, he sees Batman as a monstrous and terrifying creature and jumps off the window of the building, killing himself. Bruce can't prevent his death and knows that whatever is happening, is just affecting the people of the building. Bruce decides to climb the facade of the building up to Raffi's apartment and when he reaches the window, he sees Raffi about to attack Siran, who was armed with a knife. Bruce tackles Raffi and they start fighting to death, but in that time, Siran reaches the window and tries to jump. Bruce gets away from Raffi and grabs her, stopping her from commiting suicide. The three of them manage to get control of their actions and Raffi starts recovering when Crazy Jefferey appears at the door of Raffis's apartment. Realizing the truth, Raffi jumps towards Jefferey making them both drop several stories below. When they reach the ground, Raffi strangles the crazy man until there's no life left in him and suddenly the crippling fear is lifted from all the people and the building. The people cheer for Raffi, but Bruce knows that what just happened is an atrocity and that he must stop it once and for all. Bruce remembers that the last time he felt such a strong sense of fear was near the park and he knows what must be done.

A few moments later, an ambulance arrives at Mercy Hospital carrying Crazy Jefferey and they somehow managed to resucitate the man. Now, the source of the infectious fear is at the same place as Robin and James Gordon. 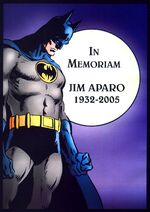 Retrieved from "https://dc.fandom.com/wiki/Detective_Comics_Vol_1_811?oldid=2453572"
Community content is available under CC-BY-SA unless otherwise noted.