"Batman R.I.P. Heart of Hush (Part 2 of 5) - The Last Good Day": Batman has arrived at the Sacred Heart Convalescent Home and breaks inside. There are no lights on the place and soon, he is attacked by Hush. Batman tries to fight back, but usin

Bruce, did you ever have a big secret? One you thought you could never tell anyone?

Batman has arrived at the Sacred Heart Convalescent Home and breaks inside. There are no lights on the place and soon, he is attacked by Hush. Batman tries to fight back, but using the darkness to his advantage, Hush sneaks behind him and shoots him in the back of his head, killing him instantly. The lights are turned on and several hynotized orderlies come to the place just at the time when Hush remembers his past...

Tommy was ten years old after his father died in a car accident and his mother was left physically scarred, unable to move. Months passed since that moment and Tommy hadn't got the chance to leave his home. Martha Wayne talked to Marla Elliot and convinced her to let Tommy go to the Hi-Hill camp along with her own son and Tommy's best friend, Bruce. At the camp, Bruce and Tommy used a boat to go on a trip over the lake and Tommy told Bruce about his father and how he was mistreated by him and how her mother instead of helping, would teach Tommy about strategy and logic to avoid getting hurt. When Tommy was explaining how relieved he was to be free from her mother's care, they were called by the camp's leader, as Marla Elliot had arrived and was looking for her son. Mrs. Elliot grabbed Tommy with the intention of taking him back home and one of the kids at the campment mocked Tommy for being a "mamma's boy". Tommy lost control of himself and beat the kid with the sailing paddle from the boat.

After this events, Tommy was sent to therapy sessions for anger issues and spent a long time locked in a padded cell, and during this time, Tommy believed that his current situation was a plot deviced by his mother, Martha Wayne and Bruce to destroy him. However, the psychologist who was treating him was a young intern called Jonathan Crane and he was so fascinated with the kid's attitude that he allowed Tommy to be released, stating that he was stable and free of aggression, which was untrue. After spending two months in therapy, Marla went to pick him from the clinic and she informed him about the murder of Thomas and Martha Wayne and Tommy couldn't be happier.

Back in the present, Hush commands his henchmen orderlies to remove the mask from the fallen Batman and it is revealed that the man who died was not Bruce Wayne. Hush tells his men to remove the suit and take the man's organs just like with "the others".

Meanwhile, Nightwing and Robin are fighting against Walrus and The Carpenter and they finish them very quickly. Tweedledum and Tweedledee try to escape the place with the stolen money, but they are stopped by Batman. After defeating the Wonderland Gang, Batman tells his partners about Hush's return and he warns them to stay sharp, since Hush seems to be going to attack someone close to Bruce Wayne.

In the meantime, Selina goes to the theater looking for Zatanna, but they tell her that Zatanna is already gone. However, Selina is called to a backstreet alley, were Zatanna is running an illegal game of three-card monte. Zatanna challenges Selina to play and everytime, Selina manages to find the right card, despite Zatanna's best efforts. 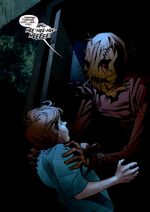 Scarecrow is working with Hush
Selina then asks Zatanna about her relation with Bruce and she replies that she has no interest on him, much like he has no interest in her. They both seem to know that Bruce is seeing Jezebel Jet, but Selina is the most disturbed for that. Zatanna then tells Selina to act quickly, before it's too late.

From a distant building, Hush looks at the both women and thinks about the kind of people that Bruce surrounds himself with. At that moment, he uses a phone to contact a man that he calls "Mentor" and tells him that he's ready. Meanwhile, at the Gotham Children's Hospital, a couple of orderlies take a boy named Colin out of his bed and take him to one of the doctors' office. On the way, Colin notices that all the other kids are afraid or terrorized of something, but just when he asks what's wrong with them, he is grabbed by the Scarecrow, who is about terrorize him as well.

Retrieved from "https://dc.fandom.com/wiki/Detective_Comics_Vol_1_847?oldid=2743568"
Community content is available under CC-BY-SA unless otherwise noted.